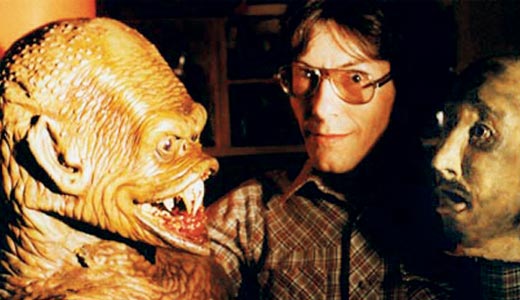 For those of us who obsess over no-budget indie horror/sci-fi/schlock films, the name Don Dohler is legendary. This is a tribute to Don, who left this world in 2006, leaving behind a legacy of 10 simply awful movies, beginning with 1978’s “The Alien Factor” and 11 issues of his DIY movie magazine Cinemagic — an admitted inspiration to filmmakers J.J. Abrams and Tom Savini. While remaining fiercely independent, he nonetheless found international distribution for all of his films, which are now available from Troma. Also included: a copy of his wonderful 1982 crapfest “Nightbeast.” Don, you are missed.

FUTURAMA: INTO THE WILD GREEN YONDER

These full-length “Futurama” features just keep getting better! This, the fourth since Fox canceled the series, finds mankind about to embark on a great new age. But ancient forces (How ancient, you ask? Why, three years older than TIME, that’s how ancient!) have returned to prevent it. Meanwhile, Bender is in love with a (gasp) married robot, while Leela runs from the law … in the form of Zap Brannigan! That leaves Fry as the last hope for the universe. We’re doomed. Includes a ship-load of terrific bonus goodies.

This $20,000 wonder was inspired by true events from the book “Murder: A Family Affair,” written by the FBI agent who captured a murderous cult whose members are now serving life sentences in Connecticut. (One of the characters in the movie can be seen reading it.) Three sexy young women take an ill-advised camping trip, easy prey for a supernatural evil in human form. OK, so it’s a sleazy slasher flick. We liked it.

FREEZER BURN: THE INVASION OF LAXDALE

MAN ON THE MOON WITH WALTER CRONKITE

Four decades ago — a lifetime for some — we watched Neil Armstrong step on the moon, live via television. Two decades ago, Walter Cronkite created this retrospective look at that amazing time with never-before-seen footage from the Mercury, Gemini, Apollo and Space Shuttle missions. As we turn our gaze once again to the moon and beyond, you can relive those amazing decades with this two-disc set housed in a collectable tin.

A rare recording of the incomparable Otis Redding from his legendary 1967 Stax/Volt European Tour, plus footage from his 1967 appearance at the Monterey Pop Festival. Accompanied by Booker T. & The MG’s, The Mar-Keys and Sam & Dave, this may be the greatest concert video find of the decade. With the world just beginning to discover his amazing talent, he died in the cold waters of Wisconsin later that same year.

A generic teen road-tripper about a high-school virgin who finds a “sure thing” on the Internet, setting out cross-country with his buds to get laid. Along the way they meet a sarcastic Amish guy, Seth Green, who completely steals the movie. Oh, and when you first see Katrina Bowden as “Ms. Tasty,” you’ll give God a high-five.

TALES OF THE UNEXPLAINED FROM BEHIND THE VEIL

“The greatest TV series never seen?” Well, the exact sequence of events is lost in time, but the basic facts are that Boris Karloff hosted and occasionally acted in 10 episodes of a spooky anthology show, possibly called “Tales of the Unexplained,” during the ’50s. But Hal Roach Studios fell on hard times, so the series never aired. Nine episodes were eventually repackaged as “The Veil” in a low-rent syndicated deal that scattered them to very-late-night American TV. This is the entire set, including two episodes that were retitled and recut to make 12, in a two-disc collectable tin. Highly recommended.

THE HAUNTING OF MOLLY HARTLEY

A quickie, flashy and likeable — if ultimately forgettable — spooker-flicker with an attractive young cast and a crazed axe-wielding mom. What’s not to love? Haley Bennett stars as the titular teen whose looming 18th birthday triggers nightmares, probably the result of her psycho mother’s insane exploits. But what if there’s something more otherworldly at work?

THE OUTSIDER: A FILM ABOUT JAMES TOBACK

Another of those Hollywood-looks-at-Hollywood movies: The filmmakers never seem to understand that the rest of us don’t get the joke. In this one, Robert De Niro is a tired Hollywood producer trying to balance the insane desires of his egotistical cast and crew against the dictates of clueless studio execs. With Sean Penn, a bearded Bruce Willis, Catherine Keener, John Turturro, Robin Wright Penn, Kristen Stewart and more.