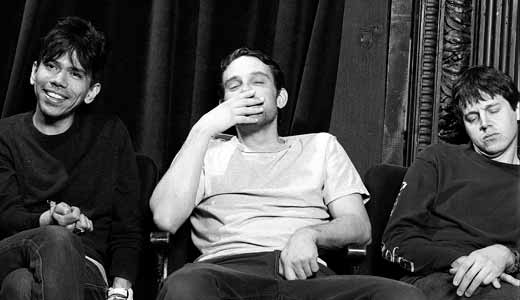 Louisville’s best independent bands might as well be inside Corey Rusk’s Chicago warehouse, suffering along with him.

Last week Rusk announced that Touch & Go, his label of 28 years, which released Slint’s landmark, Spiderland, and numerous records by Shipping News, Rachel’s and Dead Child, will lay off an unspecified number of employees and shut down its distribution network to 20 record labels nationwide.

Major labels have been battling declining record sales publicly for years, but Touch & Go’s cutbacks mark the first time the red scare has walloped a pillar of punk and real alternative music.

“It won’t be the same label it was for 20 years,” Rusk told rock critic Greg Kot in the Feb. 19 Chicago Tribune.

“It feels seismic,” said Britt Walford, the drummer for Slint, one of the biggest jewels in Touch & Go’s crown. Walford has known Rusk since the ’80s, when Slint played its first shows in Chicago with Big Black and Squirrel Bait, another Louisville band. “Corey did business the same way the whole time,” Walford said. “No contract. Just a handshake. It was simple.”

Famously, Touch & Go gave its artists a 50-50 deal on record sales, which is unheard of in the music industry.

“Honesty, reliability and business sense,” Walford said, made the label worth working with and for.

“They’re probably one of the most integrated labels in America with Louisville music,” said Jason Noble, of Shipping News and previously Rodan, whose 1994 debut Rusty came out on Touch & Go subsidiary Quarterstick. “I’ve based a lot of my professional behavior on what I’ve seen from them, because I respect them. From a teenager on, I’ve tried to emulate the ideals that that label represents.”

Rachel Grimes, whose band Rachel’s had six albums released on Quarterstick, found out online and called their offices in tears.

“It’s just shaking the foundation of what we consider the responsible approach to being in the music business,” she said. “The Touch & Go model has been a firmament for so many people and bands that are looking for someone to partner with. They don’t do anything irrationally. They’ve always been in the black. For those of us on the label, it’s been a dream relationship in terms of actually being able to make your artistic decisions the way you need to make them.”

In an economic downturn, the question is whether running a responsible and frugal business can keep granite from cracking.

“After reading about this yesterday on Pitchfork, it got me to thinking: The indie reaction to the music industry is to drop the dead weight. Are the stalwart indie labels going to be collateral damage to this line of thinking?” asked Billy Hardison of Production Simple, which booked Slint’s 2005 reunion show, as well as other Touch & Go bands such as Pinback. “Is Touch & Go actually irrelevant to the new leaner, meaner DIY aesthetic? Or was it just a bad business model that would have eventually run its course regardless of current trends?”

“Physical sales everywhere are just a lot smaller than they ever were, no matter whether you’re a major label or an indie. Even though there’s been a slight uptick in resurgence in vinyl, that’s a niche market at best,” he said. “We’re in the same boat as Corey is.”

Though their aims are the same, Nelson did point out slight differences in the way the two labels are structured. Not counting himself and Ian MacKaye, Dischord has five full-time employees.

“Touch & Go always did a little bit more of a balancing act than Dischord over the years,” Nelson said. “We have always been a pretty dinky label, whereas Touch & Go, while staying true to its indie roots and maintaining its integrity, they got as big as you could get and did some of the things that majors can do. I don’t think their model is flawed. They had as long a run as was realistic at the size they were.”

Nelson offered up one prediction: That Dischord and Touch & Go might adopt characteristics of “legacy” labels, where albums from old guard acts like Minor Threat and Fugazi continue to sell, but the label releases less new music. Touch & Go recently announced it would reissue albums by another benchmark act, The Jesus Lizard. Those plans are moving forward.