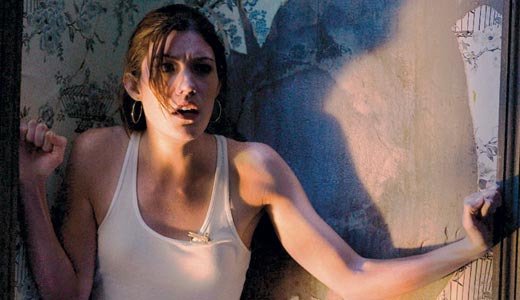 This thing scared the holy crap out of us! Jennifer Carpenter plays a young TV reporter doing a puff-piece on an L.A. firehouse. Riding with them to a 911 at an apartment building, they find cops, blood and hideous shrieks — and an outbreak of rabid zombie-ism! But before they can escape, the CDC quarantines the building, killing any who try to get out. With all power and communications cut off, and victims being pulled screaming away to a dark, hideous end, this is an original and profoundly disturbing haunter. We liked it.

Religion — or more accurately, the way that organized religion has manipulated gullible people for its own profit for centuries — is an easy target, and Bill Maher is the perfect guy to poke some holes in it. This jaundiced look at the most obvious examples includes Kentucky’s embarrassing Creation Museum, a “holy” Disneyland-wannabe in Florida, Muslim musicians who write joyous hymns about dismembering Jews, and even Vatican priests who preach a canon of church-rejection. Easy targets, but welcome.

A wildly over-the-top indie alien splatter film about a grocery store, apparently taken over by murderous terrorists who reveal themselves to be scientists. What are they doing with all those guns? Why, protecting the Earth from an evil extraterrestrial infestation that is going hatch somewhere in the building that very night, of course! Seriously gory, violent and very, very dumb. We liked it.

Director Ridley Scott’s latest pits Russell Crowe as a CIA guy against his on-the-ground operative, Leonardo DiCaprio. If they’re on the same side, you’d never know it from the way that Crowe manipulates DiCaprio, constantly under surveillance via satellite as he hunts the mastermind behind devastating terrorist attacks. Ultimately you can’t tell the terrorists from the spies from the Good Guys from the Bad Guys from the innocent civilians, which is probably Scott’s point.

Angelina Jolie turns in her usual amazing performance in this Clint Eastwood drama based on true events from the 1920s. She plays a mother whose son goes missing. The LAPD finds and returns the boy, but it is apparent to the mother that this is not her son. The ensuing media circus, in which a corrupt police department strong-arms her into a mental ward rather than admit its mistake — or complicity — is terrifying.

Sam Rockwell is the ultimate user. A med-school washout, he pays for his Alzheimer’s-riddled mother’s care by pretending to choke on food in fancy restaurants, then sponges off the patrons who are nice enough to “save” him — when he’s not cruising sex-addiction workshops for a date, that is. Anjelica Huston, Kelly MacDonald and Bijou Phillips co-star in this comedy-drama.

We were BIG fans of the TV show “Titus,” with its dark, workaday gallows humor and fatalistic approach to life and family. This is a new Comedy Central project from Christopher, a standup tome on dating, marriage and divorce from a guy who clearly understands both the horrors of, and need for, love in this damned thing we call life.

We think Greg Kinnear was miscast in this true tale of Robert Kearns, the guy who invented the intermittent windshield wiper, only to have it stolen by the auto industry. But maybe that’s just us. A nice David-and-Goliath tale for our time with Alan Alda, Lauren Graham and Dan Roebuck.

Disney goes to the well one more time in this sequel-sequel to their unexpected smash hit of 2006. This time everyone’s singing and dancing to celebrate High School Graduation and the end of the franchise, including the future mother of our children, Vanessa Hudgens. Who said Zac Efron?!

HOW TO LOSE FRIENDS AND ALIENATE PEOPLE

Simon Pegg leads a killer co-star cast — Kirsten Dunst, Gillian Anderson, Megan Fox and more — in this rough-and-funny tale of a guy who is simply a natural born jerk, and kinda likes things that way. Dunst is repulsed, but she comes to see the man inside, and the two form a mutual … well, they learn to get along. Not terrific but better than you’ve heard.

An entertaining and insightful look at all of us, with the real-life moving of a Southern plantation manor house as its focus. Once surrounded by thousands of acres, the house is now landlocked by urban sprawl. So the family that owns it decides to pick the whole thing up and move it a few miles away. But the fun that ensues could never have been predicted, as the plantation’s other family — the descendants of slaves — decide to join in the fun. Recommended.

Do you remember where you were Feb. 1, 2003? We do. That’s when the Space Shuttle Columbia disintegrated over Texas, killing all on board and reawakening America to the dangers inherent in reaching for the unknown. This is a new doc on the disaster and what it has taught us since at such a terrible price.

A welcome follow-up to the well-remembered ’95 Peter Weller sci-fi offering based (loosely) on a story by Philip K. Dick. Here, good ol’ Lance Henriksen answers a distress call to Sirius 6B, where all life was thought to have been extinguished by the titular mechanized buzz-saw life-forms. But it seems that something new has been added.

THE F-WORD: SERIES ONE

THE REAL ADVENTURES OF JONNY QUEST: THE COMPLETE FIRST SEASON