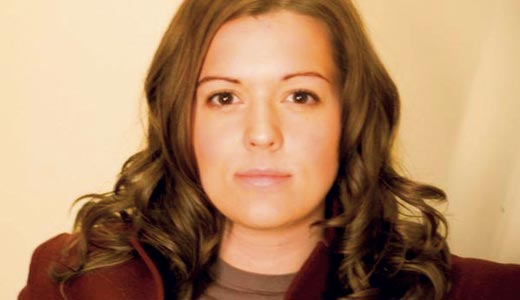 When music is near, Brandi Carlile hears a symphony. On her bedroom wall when she was 11, she recalls, was a poster of composer Paul Buckmaster. So it’s only natural that this folk singer-songwriter from Washington state is now playing gigs around the country with various orchestras. Carlile plays here Saturday with the Louisville Orchestra.

Although Carlile’s sophomore effort The Story was released in 2007, it’s still making waves today, cresting when VH1 picked her as a “You Oughta Know” artist in 2008 and her song “Have You Ever” appeared in a General Motors commercial. The Story, produced by T-Bone Burnett, peaked at No. 58 on the Billboard 200 and was recorded during a quick 11-day jag at a studio in Vancouver with her twin brothers, Tim and Phil Hanseroth, who play in her band. The 13 tracks were laid down on 2-inch audiotape, something fairly untypical with today’s tendency toward overproduction and computer programs. In fact, that critical note Carlile cracks on the title song should have been taken out and redone — but she left it in, saying it felt emotionally right, albeit it technically wrong.

When LEO Weekly caught up with Carlile last week, she was putting the finishing touches on her next album, which she promises will be recorded, faults and all, much like The Story. “We went straight to analog tape this time — no Pro Tools involved,” she says. “We played with a few different drummers, who were unbelievable. We went in with kinda a different mentality, to just to make the record feel really extreme. Not put any boundaries around ourselves — we’re really excited about it.”

Although she doesn’t expect her third effort to be released until August or so, expect to hear new songs at Saturday’s performance.

“Oh yeah, we’ve been singing some of the new songs for the past two years. While we were finishing The Story and even before, we were always writing. So we’ve been playing these songs pretty much nonstop for a couple of years.”

When not working on new material or in the studio, Carlile prefers the road. “I’m a wanderer so deep in my soul that it’s just my life. It’s such a part of my day-to-day,” she says. “I love meeting people and experiencing different things. But mostly I just love to play shows.”

The downside to that wandering spirit?

“The most annoying thing is trying to stay healthy — have enough sleep, eat the right foods, that kind of stuff,” she says.

Among her musical influences, Carlile counts the Indigo Girls, who joined her on “Cannonball” on her last record. “It was huge. I’ve always been so completely influenced by them — socially, musically, you couldn’t ask for better role models,” she says. “Getting to sing with them and play with them and just be friends has been one of the highlights of my life. I’ve been listening to Amy Ray’s solo record Didn’t It Feel Kinder on pretty much constant, nonstop rotation for the past five months. She’s amazing.”