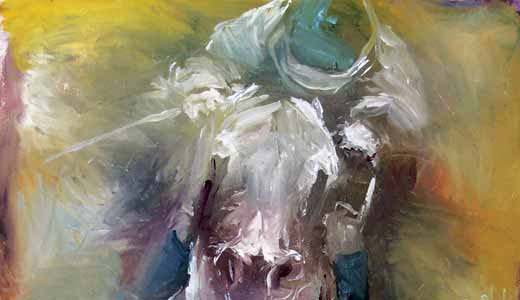 "Bound for Glory" by Jeaneen Barnhart

I was born and raised in Kentucky. And I’m a girl. But even if I weren’t a chick from the bluegrass, I still would recommend checking out “The 2009 Kentucky Girlhood Literacy and Performance Night” at The Rudyard Kipling. The evening will include readings from a dozen female writers — including award-winning playwrights Trish Ayers and Linda Caldwell — whose works are inspired by Kentucky. The event kicks off “The 2009 Kentucky Girlhood Project,” a statewide contemporary art exhibition aimed at promoting women in the arts, including music, writing and performance, video and visual arts. Following this week’s opening reception in Louisville, the exhibit of more than 30 artists can be viewed through April 5 at Murray State University, which is sponsoring the project. —Sarah Kelley

Jeaneen Barnhart is one of the best equine artists in our area. So it makes perfect sense she and her twin sister, Doreen, are the artists of this year’s Kentucky Derby Festival Poster (they also did the 1994 and 1997 posters).

The Pigment Gallery at the Mellwood Arts & Entertainment Center (Barnhart has a studio in the complex) is showing her new original drawings and paintings, as well as her giclee prints, at a reception during the Feb. 27 F.A.T. Friday Trolley Hop from 6-8 p.m. Giclees are high-quality reproductions, digital prints scanned from the original work, then reproduced on canvas. The Louisville firm ArtXP produces Barnhart’s giclees. —Jo Anne Triplett

Jennifer and Kevin McCoy create multimedia art that confronts issues of identity, mutual and individual understanding of the world around us and the one we create for ourselves, and — the decidedly less ambitious but nonetheless real — pop culture. In fact, the real versus the virtual is a necessary and present element in much of their work, which combines sculpture and video.

Friday, the McCoys are in town to discuss their new work, “Constant World: The Work of Jennifer and Kevin McCoy,” at 21c Museum. The exhibition comes to Louisville from the Beall Center for Art and Technology at the University of California-Irvine. It opens March 1 and runs through June. —Stephen George

Tori Murden McClure’s been an overachiever’s overachiever since before her record-setting Antarctic exploits and on after she became the first American to row across the Atlantic. Now this hometown hero has penned “A Pearl Before the Storm,” which chronicles her driven life. She’s chosen to pivot the book on her unsuccessful 1998 attempt at the Atlantic crossing — a moment that led to a personal epiphany. Early reviews have been fascinating in their own right: This is nobody’s “Chicken Soup for the Soul” essay, as McClure’s on-page voice clearly makes good use of her graduate degree in writing from Spalding. While the book’s still at the printer, McClure’s giving an informal talk at consignment vendor Eyedia on Friday at 6 p.m. (during the F.A.T. trolley hop). She returns Saturday from 11 a.m.-2 p.m. — an opportunity for young people to meet this inspiring figure, who’ll have her history-making boat along for photos. —T.E. Lyons

Sure, $100 sounds like a lot for an event — but this actually seems worth it. The first-ever “Old Friends Along the Kentucky Bourbon Trail” party includes not only dinner, dancing and a silent auction of horse memorabilia, but a bourbon tasting featuring seven of Kentucky’s Master Distillers in the same room. The event is a benefit for Old Friends Equine, a haven in Georgetown, Ky., for at-risk thoroughbreds whose racing and breeding careers have ended.

But back to bourbon — the distillers include Harlen Wheatley of Buffalo Trace; Jim Rutledge of Four Roses; Parker and Craig Beam of Heaven Hill; Fred Noe of Jim Beam; Kevin Smith of Maker’s Mark; Jimmy Russell of Wild Turkey; and Chris Morris of Woodford Reserve. For an extra $75, you can crash at the Seelbach for the night. Not too shabby. —Sara Havens

A band in pursuit of the simplicity of punk rock and the positive energy of dance, Matt and Kim hail from Brooklyn, N.Y., and are touring to promote their second full-length album GRAND, a highly anticipated release after nine months of sporadic recording. A creative mix of rock and pop, their dance beats and sing-song melodies will rock your soul and make your feet move. The duo delivers an impressive sound with complex harmonies and creative beats. You will buy their album and listen to it solid for weeks. The energy Matt and Kim give to each performance demonstrates how much they love their music, and you will, too. —Erica Lawson

Louisville’s Graciela Perrone will be a part of the show when acclaimed pianist and flamenco musician Sergio Monroy and the Sergio Monroy Quartet perform at the Kentucky Center’s Bomhard Theater on Saturday. World musician, Lebanon native and Lexington resident George Wakim will join the troupe on stage. Perrone, who is a native of Uruguay, is a painter as well as a singer and flamenco dancer, and she will also exhibit her visual art in the Kentucky Center lobby the evening of the show. Monroy is touring in support of his recent recording Chicuco, an homage to his parents and the memory of a childhood passed among the corner shops of his neighborhood in his hometown of Cádix, Spain. Monroy is recognized by critics as one of the outstanding figures among a new generation of young new flamenco artists. His work blends a number of different dance styles, with frequent references to jazz. —Kevin Gibson

The Tom Whitus-penned horror film “Taste of Flesh” was filmed in downtown Louisville and southern Indiana in 2007. Set in a Midwestern city circa 1996, the film follows four young girls as they check out an invite-only rave in a deserted area of town. Shockingly, they find no thumping pumping music — only a crazy man with a taste for human flesh and his sidekick chef.

The film, which received top honors at last year’s Fright Night Film Festival, will be released by Brain Damage Films on Tuesday. There’s a party at Wild and Woolly to commemorate. —Sara Havens

Massachusetts has always produced a considerable portion of the nation’s rugged punk rock and hardcore. The city’s recent, and best, export is the ever-endearing Street Dogs. Free of any ironic affectation, this quintet crafts crackling anthems about lost youth, hometown loyalty and the costs of war (curiously, they sympathize with the soldier instead of retreading hyperbolic clichés). Led by punchy Bostonian tones of original Dropkick Murphys singer Mike McColgan, the band’s Hellcat Records full-length State of Grace finds them at their finest hour as they masterfully incorporate harmonica into the standard guitars/bass/drums lineup. Live, their high-energy presentation is served greatly by audience-involved sing-alongs, creating a Beantown-bred sound that’s as good for drinking as it is slamdancing. Ashers and Flatfoot 56 open. —Reyan Ali

Things you might not know about Anni Rossi: She hates cats, even though she wears a cat T-shirt on her blog, annirossisgoodtimes.blogspot.com. She makes chocolate-covered pretzel rods, bath salts and lip balms for her friends, and she has tried yoga at least once to strange and hilarious results (ask her about it, I don’t wanna spoil the surprise). Amid these extracurriculars, she writes viola-driven tunes, some of which are on her new album, Rockwell, due out in March on 4AD. Brother Stephen opens. —Mat Herron

Nana Lampton and Melissa Meyer are well known in their circles. Lampton is, in the words of gallery owner Cheryl Chapman, a local renaissance woman: artist, poet, businesswoman, farmer, philanthropist.

Meyer’s artistic influence may be more widely felt. Her work is in many major museums, such as the Museum of Modern Art, Metropolitan Museum of Art and Guggenheim, all in New York City.

Both branches of Chapman Friedman Gallery (Downtown: 624 W. Main St., and Highlands: 1835 Hampden Ct.) are exhibiting Meyer and Lampton’s paintings, but the bulk of the show is at the Highlands location. —Jo Anne Triplett