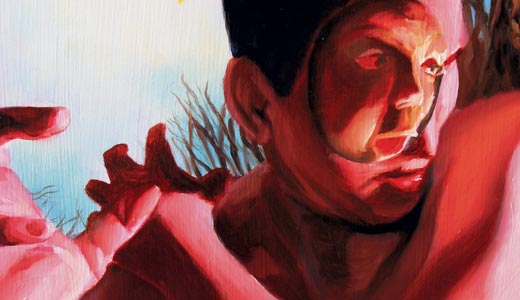 "Forget Me Not" by Terry Tapp

As a young girl growing up in Southern Indiana, Sarah Scnheider had a knack for playing piano. As a classically trained pianist, Schneider eventually discovered that her hands could create more than just music — she took to metal design and fabrication as an undergraduate at Indiana University, and now has worked as a silversmith for more than eight years. “Through music, my hands became a vehicle for communication and expression,” she says on her website (www.sarahschneider.com). “I was an artist, but never did I imagine using my hands to create anything other than music.”

Schneider, who now resides in Boulder, Colo., returns Friday for a one-night show at Regalo Gallery in the Galt House during the First Friday Trolley Hop. There’ll be live music by Teneia Sanders and drink specials at the bar. —Sara Havens

As a 6-year-old growing up in St. Petersburg, Mariya Tarakanova’s world revolved around the city’s Palace of Culture, where she wiled away the hours perfecting the art of the dance. “We didn’t have nice things,” Tarakanova says, but “arts and culture were outstanding. We had studios, costumes, supplies and we had talented choreographers.”

She emigrated to the United States in 1992 “after the proverbial wall came down,” and rode for U of L’s equestrian team. Dance lured her back when Mara Maldonado, founder of Ballet Espanol in Louisville, introduced Tarakanova to flamenco.

“Flamenco’s a mental exercise. You’re constantly solving a puzzle in your head,” Tarakanova says. “You never go through a stage where you say, ‘I learned all the moves.’”

Maldonado retired in 2003, her precocious student has stepped in to fill the gap. Friday’s Flamenco Talk performance at the Clifton Center exposes this Spanish dance in vivid movement, with performances by Antonio Granjero, who is from Jerez de la Frontera in Andalucia, Spain, one of the few places where flamenco is said to have originated; percussionist Yiyi; singer Vicente Diego; and Chuscales, a world-renowned flamenco guitarist from Granada.

The Muslim Student Association at U of L and the Louisville Committee for Peace in the Middle East are screening “Occupation 101,” a documentary that examines both the root causes and current turmoil of the Israel-Palestine conflict, this Friday. The film, which has performed well at all sorts of indie film festivals, includes assessments of U.S. involvement in the ongoing Middle East unrest and life under the rule of the Israeli military, and identifies major obstacles that remain in the way of peace in the region. There will be a discussion following. —Stephen George

U of L Student Activities Center

One of the better-named shows on public radio is the continuing series “Pipedreams,” which, as far as we know, is the one and only program devoted exclusively to organists and their organs. (Pretty good, too.) Friday night, three-time “Pipedreams” guest Damin Spritzer appears at the Cathedral of the Assumption as part of the Kelty Endowed Organ Recital Series, sponsored by the cathedral and the Center for Interfaith Relations. Spritzer, a graduate of Oberlin and the Eastman School of Music, will perform works by J.S. Bach, Cesar Franck, Louis Vierne and Camille Saint-Saens. —Bill Doolittle

Cathedral of the Assumption

Ying Yang Twins are no strangers to Louisville, and their new radio station, yingyangradio.com, won’t be either. Two days of performances are planned and the bill is stacked: D. Black and Smoke E. from Playa, DJ Unk, Novakane and many more, including Willie D., formerly of Geto Boys. MTV had GB’s video “My Mind is Playing Tricks On Me” on frequent rotation, and its hooks had, well, hooks. Willie D., a Houston MC who now lives 45 minutes down the road in Huntsville, Texas, diversified his assets by jumping into real estate. “Real estate is definitely easier than music: It’s strictly a numbers game,” says D., who’s mentoring a band named after the Houston suburb. “With my ideas, I wanted to basically do a group that was similar in make-up to Geto Boys, but different personalities, talking about social issues, political issues, one that could push the envelope, but speak from a middle America point of view.” —Mat Herron

Terry Tapp, tattoo artist at Electric Devil, considers himself a painter of “visionary hedonism.” There’s an honesty in his lush oil portraits — a raw exposure of both the artist and his subjects. It may make you feel a bit exposed yourself, but that raw quality can be as nourishing as sushi. Tapp has an exhibition of new work opening at the Tim Faulkner Gallery at this month’s First Friday Trolley Hop. Faulkner, who changes the wall color for each show at his Market Street gallery, has a fantastic eye for quality art and is always worth a look. —Britany Baker

The Kentucky Waterways Alliance brings the Wild and Scenic Environmental Film Festival to Louisville Saturday, toting along short and feature-length films on mountaintop removal mining, water issues and the connection between religion and conservation. The feature is “Mountain Top Removal,” a documentary directed by Michael O’Connell and produced by Louisville’s Gill Holland, which will be followed by a panel discussion featuring, among others, Tom FitzGerald, director of the Kentucky Resources Council.

“We’re excited to bring this national film festival to the state of Kentucky for the first time ever,” says Judy Petersen, KWA director. “The event is a great opportunity to learn more about different environmental issues important to our state while being inspired by the work of others.”

Glass is curvy. Glass is smooth. Glass is beautiful. Glass is sexy. And apparently I’m not the only one who thinks so. Flame Run co-owner Susie Slabaugh White came up with the gallery’s new exhibit when she noticed the human form was a recurring theme in glasswork she admired.

“I have worked with the human form for years, and I continue to explore its definition,” she says. “‘The Human Formed’ has not only to do with defining lines but with the soul and inner dimension of each subject.”

The exhibit includes work by White and her husband Brook, as well as nine other artists from across the country. The opening reception is Friday at 6 p.m. —Sara Havens

“We went into this thing knowing that it’s gonna be a fun band. We’re all a little older, three out of four members are married. I have a kid.”

Buddha listened, bestowing one federal case of a lineup: Fellow Pine Bradley Coomes marshalling able beats, bass courtesy of Donnie Bott, an engineer who once lived in Nashville with Lou Barlow and Jason Loewenstein without knowing how cool they actually were, and Mike Nix, whose capable hands are perhaps Dangerbird’s most effective weapon. Saturday, see it gel when the band releases their debut, Doctor Legs & the Medicine Ball.

“I didn’t want it to be too technical,” says Gray. “I wanted to keep a loose feel, not so loose that it sounds lo-fi, but kind of an Exile on Main Street feeling.” CDs will be available on a pay-what-you-want basis. Adventure opens. —Mat Herron

Chefs from 13 Louisville area restaurants will gather Monday at Captain’s Quarters Riverside Grill to see whose version of shrimp and grits is the city’s best, and also raise money for FEAT, an organization that provides support, encouragement and information to parents of children with autism. Local culinary celebrities Chef Dean Corbett, Chef John Castro and LEO’s own Robin Garr will judge and proclaim the winner of the title. Meanwhile, guests at the Louisville HotBytes Shrimp and Grits Throwdown will enjoy samples of each of the 13 entries along with a cash bar. An event press release noted that shrimp and grits arrived on the Louisville dining scene in the mid-1990s; local chefs have taken this low-country classic and created their own unique versions, which provided inspiration for the charity event. —Kevin Gibson

The current exhibition of work by Stephanie Potter and James R. Southard shows just how different artists can view an end product. Potter’s photography gives us a peek into the thought process behind her prints and drawings. She specializes in highly detailed wood engravings, using her photographs as inspiration.

Southard, an apprentice at Zephyr Gallery, creates photographs that illustrate the ebb and flow of crowds, showing interaction with each other without the participants really acknowledging it. He combines up to 300 multiple exposures, taken at the same location over a span of time, to get the final print. Many of the public locations shown are in Louisville, such as Oxmoor Mall and Southeast Christian Church, and in Pittsburgh, where he is attending Carnegie Mellon University. —Jo Anne Triplett

The Carnegie Center has made a name for itself with its display of the textile arts. The sixth annual “Form, Not Function” national contemporary art quilt exhibit features 39 artists, including two from Kentucky — Melinda Snyder of Louisville and Caroline Szeremet of Hebron.

Quilt historian Shelly Zegart will present a talk on “African-American Quilts: Many Myths, Many Perspectives” Sunday from 2-4 p.m. (free but pre-registration is required). The River City Fiber Artists will also give a free gallery talk on Feb. 21 at 10 a.m. —Jo Anne Triplett