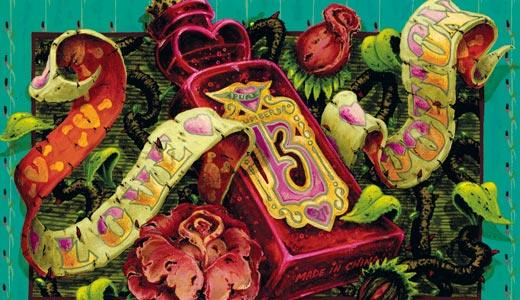 There’s more love in the air than ever before, or at least more Louisville Is for Lovers. This year’s release of new love songs is celebrated with four events: Wednesday at 8 p.m. is an acoustic showcase at The Lounge (947 E. Madison, 889-5889). On Friday, two institutions make it practically a “Louisville Is for Lovers” Day: WFPK’s Live Lunch (www.wfpk.org) accommodates seven bands, and later that afternoon there’s a reconvene at ear X-tacy (1534 Bardstown Road, 452-1799). The capper is Saturday’s all-ages showcase at Skull Alley, featuring The Mack, Deer Meet, The Deloreans and more (1017 E. Broadway, 749-9541).

Organizer John King received so many good tunes he “just maxed out on the music for one disc.” The remaining 50 minutes of music are on a bonus disc limited to the first 100 copies. King has taken orders for these albums from as far away as Antarctica (“people working in a laboratory”). Vol. 10 is already in the works, he says, because “people like Will Oldham, they map out their year in advance.” —T.E. Lyons

University Club, U of L

Back in 1909, a black man visiting the White House was considered a scandal. The same year, an important civil rights organization was founded to help tear down the wall of Jim Crow brick by brick, which helps explain why there is a Barack Obama a century later.

Much has been accomplished since the founding of the National Association for the Advancement of Colored People. It’s also incredible to think about what the fawning over the elevation of President Obama and Republican National Chairman Michael Steele will do for the black America still left behind remaining racial barriers.

The oldest civil rights organization is celebrating its 100th anniversary, and the Louisville branch will do its part by hosting a Founders Day Dinner to launch a yearlong celebration of the group’s organizing.

Besides watching the 40th NAACP Image Awards, the Louisville chapter plans to give a special tribute to William English Walling, one of the five principal organizers of the NAACP, who was born in Louisville. —Phillip M. Bailey

Here are a number of art-related ways to celebrate Valentine’s Day: “Blow a Kiss” in the Glassworks Hotshop (www.louisvilleglassworks.com) on Feb. 12-13 and every Saturday and Sunday in February ($50, reservations required) or create a stained-glass heart in the Walk-In Workshop on Saturdays in February ($30). Objects of Desire Gallery (www.objectsofdesiregallery.com) is presenting “Love, lost & found,” an exhibit of work by Stephen Irwin (through March 7), with the reception on Feb. 12 from 6-8:30 p.m.

“Imaging Desire,” the subject of the Aegis second biennial symposium on Feb. 14 at U of L (www.art.louisville.edu/aegis), includes presentations beginning at 10 a.m. and an exhibit reception at 4:45 p.m. (through March 21). Free and open to the public. “Hearts & Kisses” is at The Gallery on Pearl (www.thegalleryonpearl.com) through Feb. 14. Jeral Tidwell and Rosie Felfle give us “LOVE” in an art graffiti/graphic design kind of way at Daniel Chaffin Furniture Makers (804 E. Broadway) through March 12. —Jo Anne Triplett

Ever been to a party that seemed cursed from the start? Perhaps there was no parking. Or people brought their kids instead of booze. Or you found the host bleeding from his ear from a gunshot wound and his wife was nowhere to be found. That’s the premise of Neil Simon’s comedy “Rumors,” in which four couples, invited to celebrate a 10-year wedding anniversary, conspire to conceal this mystery from each other, unsuccessfully.

“Rumors” is a production of Floyd Central’s Studio One Series and is directed by Indiana University student Devin Pogue, who is student-teaching under the supervision of Chris Bundy, director of theater arts at the school. —Sara Havens

What’s Love Got To Do With It?

The ladies at Fleur de Lez aren’t against love, they’re just tired of feeling obligated to spend money on cards and chocolate and an expensive dinner to show some partner appreciation.

“The purpose of the party is to poke fun at Valentine’s Day and all the commercialism that comes along with it,” says website creator Scheri Smith. “I mean, who really needs a giant red gorilla that plays ‘Let’s Get It On’?”

Friday night’s event, titled “What’s Love Got To Do With It?,” features live music from The Blue Umbrellas, The Sirens, Gender Pop Cabaret and WFPK’s Laura Shine, and is a fundraiser for Fleur de Lez and the Fairness Campaign. —Sara Havens

Willie Breeding (review, page 38) took matters of sound into his own hands when he attended recording school in L.A., where he formulated a musical diary that would become Cheap Vodka Rain. Always a fan of New York, he’s settled in hipster stronghold Brooklyn, where he ran into, then befriended, Dave Bielanko, singer, guitarist and founder of Philly’s Marah. Lots of back, forth and listening compelled Bielanko to take an active role in Vodka’s genesis at a studio five minutes from Breeding’s apartment. Despite the New York state of mind, Breeding is still the kid from Richmond, Ky., through and through. Brooks Ritter opens. —Mat Herron

This Cinderella story has nothing to do with sports (imagine that). It’s the real deal, with pumpkins, a fairy godmother and a pair of glass slippers — or maybe pointe shoes in this case. Marking the 30th anniversary of the production, the Louisville Ballet presents “Hilliard Lyons Cinderella,” choreographed by Alun Jones and Helen Starr. This classic story dates all the way back to the first century B.C.E., where the first version was written by Greek historian Strabo. Since then, it has weaved its way through cultures the world over, all the way up to our very own Center for the Arts, where one might take the kids and offer some exposure to the performing arts, go on a hot Valentine’s Day date or simply enjoy the familiar feel-good fairy tale and exquisite dancing. —Jane Mattingly

Several weeks ago, I was part of a panel discussion about mountaintop removal mining that featured seven other speakers, most of whom came from eastern Kentucky. One, to remain nameless, told the crowd of some 200 people that us city folk didn’t need to be telling the people in the country how their land should be used, and that mountaintop removal mining — a dangerous and destructive practice by any account other than the coal industry’s — was a boon. Even though us city folk are unwitting accomplices in the destruction, we can (and should) have a voice. That’s what this Hoedown is all about: music by Carol Kraemer and Laura Shine (WFPK), Public Outcry, and the Reel World String Band; square dancing; and a screening of the documentary “On Our Own Land.” It’s all in anticipation of “I Love Mountains” day, Feb. 17 in Frankfort, where you can exercise your right of dissent with thousands of fellow Kentuckians. —Stephen George

Louisville film festivals have come and gone, but the Jewish Film Festival soldiers on. In its 11th season, the fest — sponsored by the Jewish Community Center — is still bringing first-rate international cinema to Village 8 Theatres and shedding light on a range of Jewish perspectives, from the misogyny of Orthodox culture to reverberations of the Holocaust.

This year’s centerpiece is “Un Secret,” a much-lauded period film/mystery about Jewish life in post-occupation France (Feb. 19, 7 p.m.). There is also a selection of both Israeli and American films, documentaries, dramas and comedies. Tuesday, Feb. 24, features a screening of “Making Trouble” (about Jewish women comedians like Joan Rivers and my fave, Gilda Radner) and a stand-up act by Mark Klein at the Comedy Caravan ($15). —Alan Abbott

Diddy blames DJs for hip-hop’s downturn, so what do they do? Lock arms and network. KYMP Kamp DJs is an elite collective that, while based in Louisville, claims membership as far as Miami. DJ Marlei Mar, a 15-year veteran of turntables, founded it five years ago. “Kentucky has never had an actual ‘DJ crew’ before,” he says. Since then, they’ve held a quarterly conference and awards show.

This Sunday, they put on the Music Breakers Only: DJ/Music Conference, 1st Quarter Edition at Club Vinnie’s. Local and national rappers perform, and a conference-branded mixtape will be sent digitally to thousands of DJs nationwide. Mar laughs about Diddy’s remarks: “Technology is the downfall of hip-hop,” he says. An artist’s best friend, he answers just as quickly, is “a DJ.” —Damien McPherson

You can’t have art without artists, something the Kentucky Museum of Art and Craft knows about. To show its appreciation, KMAC is presenting its first exhibition of recent work by 72 artists who happen to be KMAC members.

The 92 pieces are in a wide range of media, including ceramics, rugs and paintings, from the traditional to innovative. Featured in the show are familiar artists-around-town, such as Sarah Frederick, Dave Caudill and Craig Kaviar, as well as some newbies, like Suzi Zimmerer and Keith Kleespies. —Jo Anne Triplett

‘Cryptids of the Old and New Worlds’

It’s funny, I don’t believe in government, true love conquering or that Seth Rogen is funny. But gosh darn it, I still believe in Bigfoot, despite the hoaxes and blurry photos.

Of course you don’t have to believe in Bigfoot to enjoy the art of Adam Potts. Cryptid animals — those creatures alleged to exist but not yet proven by science — are the subject of his new collection, on display through the end of the month at Ultra Pop. Portraits include some of the world’s unique legends, such as West Virginia’s Mothman, New Jersey’s Leeds Devil, the Chupacabra of Puerto Rico and Kentucky’s own Pope Lick Goatman. And not one of the paintings is blurry. —Ben Schneider