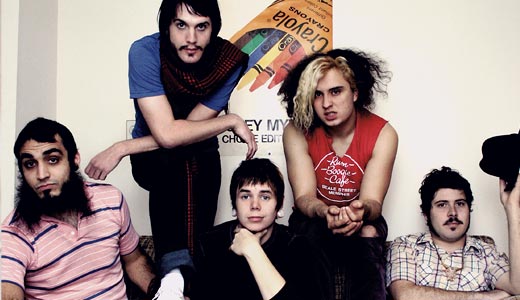 It wasn’t Eric Sean Nally’s fault — the cymbal stand didn’t look both ways before it poked a hole in his head. Nally wound up in the hospital, bleeding profusely and leaving a crowd of Greenville, Ohio, teens dumbstruck.

“It was fun, though,” says Nally, frontman for Foxy Shazam, who play Bulldog Café this weekend. “Those are my favorite types of shows.”

Lately Nally’s reputation is preceding him. In Foxy Shazam’s early days, crowds looked at Nally as an oddity, or maybe an attention-starved, middle-class guy masquerading as a lunatic.

“Our earlier days, when we would play, people didn’t understand what was going on. They enjoyed it, but it wasn’t something they really hooked onto,” he says. “There’s more of a following for us now. We were born to be entertainers. A lot of us [in the band] don’t have anything in common. It’s more Dr. Jekyll & Mr. Hyde.”

The band’s new album, Introducing Foxy, attempts to condense wildebeest aggression. The title song comes on like a Jesus Lizard outtake before Nally’s vaudevillian presence supercharges everything, while “Red Cape Diver” gives Mike Patton a run for his money.
“We wanted to be up front and aggressive, in your face, give-you-it-all-at-once kind of thing,” he says. “Sometimes I listen to the record and think we might’ve done that a little too heavily.”

Where does it come from, maestro?

“Michael Jordan is my biggest inspiration,” he says. “Not because I love basketball. I actually think it’s pretty boring. But I felt like he was so magical at what he did. Nobody else had anything on him. It was inexplicable how he did his career. I told myself I wanted to be the Michael Jordan of rock ’n’ roll.”