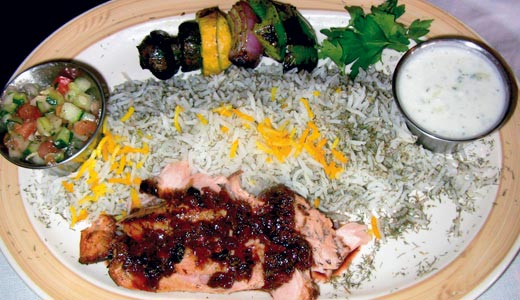 We’ve talked before about how Louisville’s Iranian-American community started in the 1970s with a crowd of students at the University of Louisville who decided to stay around when the Ayatollah Khomeini led the Iranian revolution and things went sour back home.

Iran’s loss has been Louisville’s gain, as a surprising number of these folks went into the restaurant business. Initially many of Louisville’s Iranians worked at the late, storied Casa Grisanti. They eventually ventured out to start restaurants of their own, and in more recent years have begun introducing us to their native cuisine. (The respected restaurateur Majid Ghavami, for instance, bridges this gap, now serving as both owner of Saffron’s, the city’s first Iranian restaurant, and general manager of Volare, one of our most popular Italian eateries.)

Now comes another Italian-to-Iranian translation, as the owners of Café Glace on Frankfort Avenue, a gelato shop, have opened Caspian Grill, an excellent Persian restaurant on Bardstown Road, in the quarters formerly occupied by Sweet Surrender.

(With post-Ayatollah Iran often at odds with U.S. policy, many of the Iranian restaurants describe themselves as “Persian,” an equally valid term going back to the region’s ancient empire.)

The storefront isn’t oversized, but high ceilings give it a spacious feel. The walls are painted the color of saffron and decorated with a few photos of Iran and Persian wall hangings. Bright Tiffany lamps hang overhead. White tablecloths (under protective clear plastic) add an upscale dimension, and soft white cloth napkins feel like linen.

I’ve found the fare consistently tasty and well-prepared on several visits. Lunch and dinner menus are similar, with prices a bit higher in the evening to account for larger portions. Appetizers are $3 (for panir sabzi, herbs and feta cheese with lavash bread) to $5 (for kashke bademjoon, a chopped eggplant, garlic and yogurt dish) at lunch and dinner.

We enjoyed a lunch version of that salmon dish ($7.95 on the lunch menu). A fair-size block of tender, grilled boneless salmon was painted with a tart barberry sauce. Barberries resemble tiny cranberries in appearance and flavor. Laced with a dash of saffron, the purple sauce makes a nice foil for the salmon. This dish came with basmati rice laced with dill and a skewer of grilled mixed veggies.

A lunch portion of the khoresht of the day ($7.50) was a real winner: Chunks of boneless dark chicken meat had been cooked until falling-apart tender in a thick, sweet-savory sauce of pomegranate seeds and walnuts pounded into a paste. This dish (I believe it’s called fesenjoon in Iranian) was mind-numbingly delicious in its combination of flavors and textures. Highly recommended, if you see it on the specials list. It came with basmati rice, and both entrees came with small dishes of yogurt sauce and chopped cucumber, onion and tomato in a tart vinegar dressing.

When I eat a lunch as good as this for a price like this ($18.50 for two including hot, clove-scented Persian tea, and a tip exceeding 20 percent for superior service), I am mighty glad Bush didn’t blow Iran off the map.

*Cafe Beignet will be open Fat Tuesday, Feb. 24, serving fresh New Orleans-style beignets from 7 a.m.-9 p.m. Any customer who comes in wearing Mardi Gras beads will get one free beignet. Beignets are served all day, every day; Saturdays and Sundays a full breakfast menu is offered.

*Lent begins Ash Wednesday, Feb. 25. At the Fish House you’ll find seafood chowder, seafood gumbo and soups of the day. Tilapia, catfish, a catch of the day and cod may be fried in your choice of Green River Style or golden-brown breading, or you may choose baked fish.