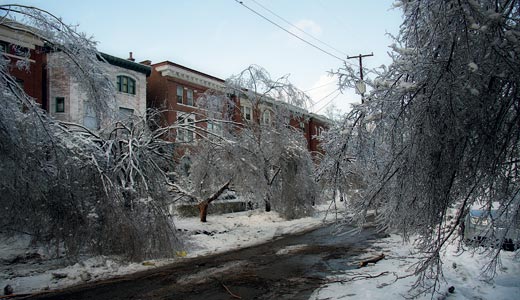 The first time the city of Louisville tried to buy the privately owned company that provided its electricity and natural gas, the mayor was Democrat Wilson Wyatt, and it was the early 1940s.

Wyatt’s initiative enjoyed healthy support from the Board of Alderman out of the gate. But a sudden bout of conviction sprung on Republicans, who decided with evidently little wringing of hands that it was essential to keep utilities private — and the power-company gravy just so happened to spread their way. The movement, as it were, was defeated.

Some 60 years later, in 2004, Mayor Jerry Abramson offered again to buy Louisville Gas & Electric, after PowerGen (a British company) sold the utility to E.ON (a German company), who then appeared to be considering a sale. There was much furor and uproar on both sides: The common belief is that while municipally owned utilities tend to be cheaper and more progressive, typical market pressures do not motivate them or their workers.

Louisville has just endured the two most significant power outages in its history — both the result of natural disasters, occurring about four months apart. Among the chatter of the frustrated, powerless proletariat — amidst calls for burying overhead power lines or a city investigation of LG&E’s responsiveness to crisis — has re-emerged the notion that taxpayers should buy the power company. The city owns the water company, which drips some $16 million into the general fund every year. A public utility would generate a lot more than that.

Think of it as the ultimate shop-local campaign.

In 2004 Abramson assembled a team of advisers, including lawyers, financial experts and energy consultants, to decide whether it was feasible to buy LG&E.

“A lot of it has to do with, is the resultant business plan one that makes sense?” says Angelo Muzzin, a principal at the consulting firm R.W. Beck who was part of the mayor’s advisory team. “Will the resultant utility be able to provide the same level or a better level of service as the private company” at the same — or even cheaper — rates?

Yes, they decided. If E.ON planned to abandon LG&E, buying it would’ve meant preserving some 1,800 jobs. (Since, LG&E’s local workforce has expanded to more than 2,100, according to spokesman Chip Keeling.)

But we’re still paying off E.ON shareholders because, at least in part, Abramson and his team didn’t want an antagonistic takeover. And, while his offer remains on the table, they still don’t want it to go down that way. It was only going to happen if E.ON decided to sell its Louisville holdings, says Chad Carlton, a mayoral spokesman. Instead, the German company made this its North American headquarters, and an official there said Tuesday there are no plans to sell.

But the concept is intriguing, particularly given the amount of money — some estimates are more than $50 million — ratepayers will ultimately spend, via an increase in LG&E rates, to repair storm-damaged infrastructure from the windstorm and ice storm, with only minimal upgrades to the overall system.

“The problem with the private sector, and the introduction of competition into the power-generation equation, is that nobody wants to build and maintain the grid, because there’s no money in that,” James Moore, an electrical engineer and activist, says. “Lack of a proper grid is one reason why wind power has not yet achieved its potential. Only a government or municipality-directed initiative can provide the impetus to create these kinds of infrastructure improvements.”

Typically, either an elected or appointed board of directors governs city-owned utility companies. And while they are financially obligated to ratepayers and not shareholders, there is also the matter of keeping costs down. That is, for all the rabble-rousing about having a more progressive electric company that invests in major infrastructure advancements rather than annual cleanups, there will be ratepayers — probably many of them — who don’t want to pay more, period.

“You’d have that same type of push me, pull me of folks who are looking for the long-term benefit versus the short-term benefit,” Carlton says.

There are 59 municipal utilities claiming membership in the Municipal Electric Power Association of Kentucky. During the recent ice storm, these utilities “set the benchmark” for repairs, according to Annette DuPont-Ewing, the agency’s executive director. She says of the 102,000 households that lost power, 99 percent were back on within a few days.

“We pride ourselves on being efficient,” DuPont-Ewing says.

In contrast, LG&E spent nearly two weeks restoring power across Louisville and the surrounding areas — a decidedly different landscape, regardless.

William Ray is the superintendent of the Electric Board of the City of Glasgow, in western Kentucky. The utility, which serves about 7,200 electric meters, was the first in the United States to offer broadband access, he says. Their rates are among the lowest in the state.

“It’s too important to the people … for an essential service to be controlled by a group of stockholders that are more interested in rate of return than the happiness of the consumer,” he says.

According to the American Public Power Association, there are more than 2,000 municipally owned utility companies in the U.S. Whether Louisville becomes one may be up to its citizens, who will most certainly have to put some money where those mouths are to move E.ON and the mayor’s office.

“Publicly owned utilities have historically had lower costs and better local control through locally elected boards,” says Brian Tucker, a south Louisville community activist. “I am certainly for that, as would be any concerned citizen.”