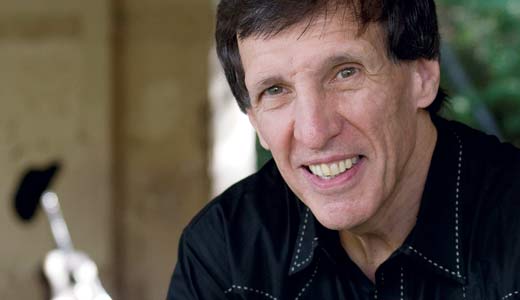 “It seemed like it was a lot more sitting down after the show and getting together and picking and trading the songs,” said Clark, a Louisvillian whose new album, Winding Highways, is out this week.

Clark’s lifestyle had all the trappings of a folkie making his way: he was politically active, supporting then-presidential candidate Lyndon B. Johnson, and was barely getting by on the $10 the Night Owl paid the bands. “We were living on a shoestring.”

Around 1970, Clark heard “Gentle On My Mind” by John Hartford, who had moved to Nashville six years earlier and wrote the tune after seeing “Doctor Zhivago.” Clark was hooked. He packed his bags and moved south.

He signed a five-year songwriter’s contract for basically no money. “In retrospect it was a kind of a dumb business move,” he said, but in the long run, it gave him more of an incentive to keep writing.

In crafting Winding Highways, Clark’s diligence paid off. He roped in Jim Rooney, John Prine’s producer, who later asked Prine to sing on a track, marking the first time Prine has ever yodeled on record.

“It came out better than my wildest dreams and expectations,” Clark said of the album. “I wanted to paint my canvas.”

The Center for Women and Families’ Celebration of Service & Survival honors five women of distinction Thursday, Feb. 26, and three veteran performers join in.

The Natalie Boeyink Quartet plays a piece written especially for women who are victims of sexual abuse and violence. Boeyink, who hosts “Java Jazz” Sunday mornings on 91.9 WFPK-FM, has played with David “Fathead” Newman, Claudio Roditi, Lorraine Feaher and other jazz luminaries.

Local mainstays danny flanigan and Kathleen Hoye, who has opened for Gillian Welch, A.J. Croce and Patti Griffin, also perform. The ceremony takes place at the Marriott downtown (280 W. Jefferson St., 627-5045). For ticket and sponsorship info, call the Center at 581-7200.