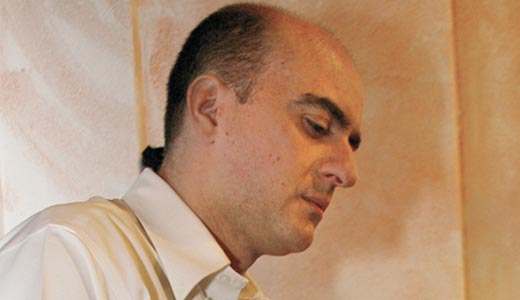 Davide Logiri’s first taste of jazz came while listening to records where Ramsey Lewis interpreted the Beatles. Even as a young child, Logiri found himself “stimulated by the possibility to change a song, ad lib based on your inner feelings.”
But the Italian pianist, featured on International Night at the University of Louisville’s JazzFest, vividly recalls the event that changed him from a budding classical artist (then studying at Conservatorio Giuseppe Verdi in Milan) to a young musician enthralled by jazz. As he tells LEO Weekly, it was when he attended a solo performance by Herbie Hancock, who “was able to mix up jazz elements with some typical devices mediated from classical piano literature of the 19th century. He created many different atmospheres, improvising freely on his tunes, exploring the wide range of possibilities given by an acoustic grand piano … with a strong rhythmic feeling [so] that it seemed to me that a rhythm section was there to accompany him even if he was alone.”
Logiri returned to complete his degree at an institution he remembers as traditional and conservative, with a faculty that “wasn’t open to anything different from classical music.” All the while, he looked forward to fully exercising his devotion to jazz. Now, on the eve of his U.S. tour, he’ll revisit the conservatory, which now has a jazz department and has invited him to perform his arrangements of Miles Davis tunes for a nine-element ensemble. Logiri then plays during the first of the nightly concerts that mark Jazz Week — the climax of the U of L fest that has been a significant event in the jazz world for 15 years.
Logiri has travelled extensively around Europe as a performer and teacher. He points to the UK and Switzerland as particularly benevolent for promoting quality in music. For instance, after he’d successfully recorded and toured in collaboration with a Welsh saxophonist, the English Jazz Service stepped in to sponsor a follow-up tour, with assistance to small jazz clubs that normally can’t afford to bring in international talent.
The Wednesday, Feb. 25 (8 p.m.), International Night concert will enjoy a helpful boost of its own, as the National Endowment for the Arts has brought the Russian quintet New World Jazz Ensemble to fill out the program. Location is the Margaret Comstock Concert Hall at U of L’s School of Music (2301 S. Third St.). Tickets are $10 ($5 for students); call 852-0524 for more info.