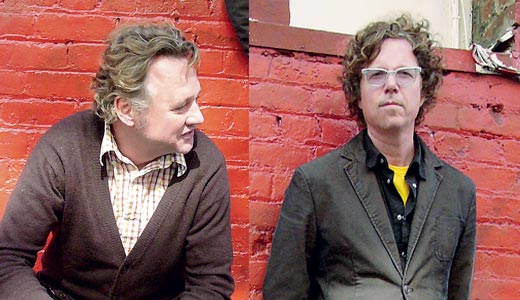 Mark Olson has lots of fans, but not a certain Ethiopian soccer team playing a pickup game in Riverside Park in Minneapolis. That’s where — and about whom — Olson wrote “Kick The Wood,” off he and fellow Jayhawk Gary Louris’s latest, Ready For The Flood.

“The Ethiopians asked me to move,” Olson laughs, but even the polite kiss-off brought inspiration. “I got the line about ‘pretty colors on the hillside’ because they were wearing crazy colors on their uniforms.”

After touring together in 2006, they wrote Flood largely in Louris’s garage, combing through cassette tapes, some of which were 10 years old. Black Crowes singer Chris Robinson produced. “He was respectful of the songs, and the beauty of it was that he’s a giant musicologist,” Louris says.

It’s the first of what both say could be many future collaborations. “We have a certain thing that’s been undeniable,” Louris says by phone from his house in Cádiz, Spain, south of Sevilla. “We just work well together. We did in 1990, and we do in 2009. I’ve never had it with anybody else exactly like that.”