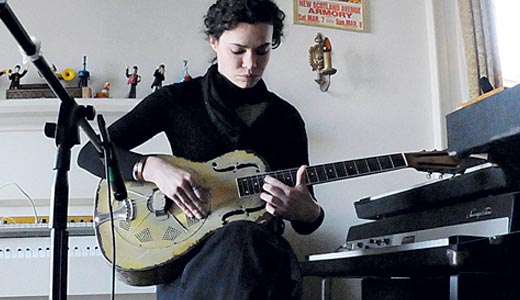 Whenever she starts to write a song, "I go to sleep for a very long time," Larkin Grimm says.Photo by Jim Gavenus

The track record of cults in America is as wholesome as Lenny Bruce. Heaven’s Gate in San Diego, David Koresh at Waco, Tex., and Jonestown in the jungle of Guyana conjure images of fanatical proselytizers, flame-engulfed nondescript compounds, mass suicides and Technicolor shame.

A benevolent flip side to that is “cult” as communal living space, where every adult acts as guardian, gender equity is actual, not theoretical, and free minds cling to their imagination as synapses fire away.

Larkin Grimm isn’t here to tell you Earth will be recycled or ply you with miracle elixir. But her back-story wholeheartedly informs her music.

Grimm grew up in Memphis as part of the Holy Order of Mans, an experience that left her steeled against snap judgment. “The most important thing is that I have a very clear idea of what brainwashing is, and I try to avoid it,” she says. The commune “was a very esoteric, spiritual place. Everyone there was a deep searcher. Sometimes I think the least brainwashed people are the people who live in various cults.”

After the Jonestown massacre in November 1978, the federal government placed the Order on its cult watch list, and rather than wait for the blue coats to show up, Grimm and her family of fiddlers and singers repaired to the Blue Ridge Mountain town of Dahlonega, Ga. “People felt really threatened. Everyone ran away trying to find privacy,” she says.

Grimm uses that foothill town as a homebase but spends most of her time on the road. It’s her way of staying free. “As soon as people start telling you what to do, ‘Your rules don’t apply to me. I’m going to Austria,’” she says.

Whatever it is that she found, Grimm’s newest, Parplar, is rife with it. Sprightly bluegrass incantations and galloping numbers sit alongside eerie hymns made whole by producer Michael Gira, who encouraged Grimm to send him raw, stream-of-consciousness material.

“I censored myself a lot because I was working as a babysitter,” she says. “Michael noticed that. He realized there was a lot more to what I was doing than just the sweet-natured love songs that were coming out.”

One outcome is “Durge,” a Sanskrit hymn to Kali, the goddess of death and destruction, whose legend Grimm learned of first while playing in Atlanta with Hari Krishna followers, who sing the names of gods during yoga, and then with a woman in Los Angeles.

“When the mother gets really angry, she explodes into this crazy, many-headed beast,” she says. “She won’t stop killing everything until the world is destroyed. The only way to stop her is if you find her lover and convince him to lie down on the battlefield and pretend he’s dead. Or if you find a baby, she’ll pick him up and breastfeed him.”

For Grimm, who is not Hindu, Kali’s legend still applies: “In this society, we think of war as something men do. We don’t think of women as being war-like.”

Another larger-than-life woman was on Grimm’s mind during the making of Parplar: “When I started writing the record, that was the time when Britney Spears shaved her head. That was a major breakthrough for Britney. I’ve always been a man-loving feminist,” says Grimm, who has a boyfriend. “I’ve been through that breakthrough or breakdown process that she’s going through. I know exactly what that is. Lucky for me, there weren’t cameras following me.”

Don’t buy her a girl power T-shirt, though. “I get accused of being a radical feminist a lot, and a lot of people have very negative associations of that,” she says. “They think it means that I hate men. How much of a feminist could I be when I’m cooking breakfast for my boyfriend right now?”