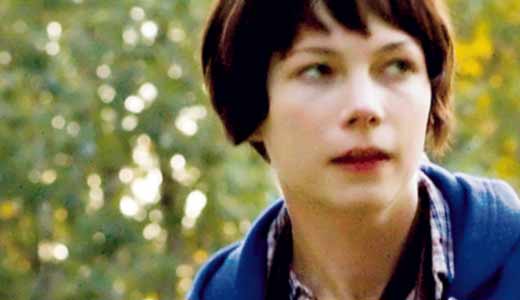 Sometimes it’s easy to forget that film is a viable art form. You see too many “He’s Just Not That Into You”s and wonder why you haven’t been to the theater in months. And just when you’ve sworn off Hollywood altogether, along comes a Picasso-like “Wendy and Lucy” to restore your faith in modern filmmaking.

Indie filmmaker Kelly Reichardt (“Ode to Billie Joe,” “Old Joy”) successfully frames a simple story of a girl and her dog. To outsiders, the pair seems lost, alone — vagabonds in search of a place to set up camp. But to Wendy (Michelle Williams) and her dog Lucy, the small, rundown Oregon town where they land is anything but home. They’re just passing through as they make their way to Alaska, where jobs are easy to come by, Wendy hears.

But when the car breaks down, the girl and her dog find themselves homeless and broke (Wendy has just enough money to hop a ride on the ferry to Alaska). The bright hope and possibility that Alaska offered is further dimmed when Wendy is caught shoplifting cans of dog food at a local grocery store and gets arrested, leaving Lucy tied up outside the store. A few hours and $50 later, Wendy returns to retrieve Lucy, but, as her worst fear is realized, the dog is gone.

Reichardt’s minimalist style is what makes “Wendy and Lucy” such a stark, tragic story. The long stretches of silence as the two wander along the railroad tracks, Wendy’s sporadic, aloof humming and the short encounters of human contact along the way (including a brief appearance by Louisville singer-songwriter Will Oldham as a fellow vagabond who suggests she head for Ketchikan once she gets to Alaska) speak more to the viewer than any amount of dialogue. Williams’s Wendy is fragile yet dauntless, as one would have to be traveling on her own with few resources and no help from others. She’s a reserved character — emotional outbursts are few and far between as Wendy searches for Lucy and has to eventually rely on the help of another, the security guard at a drug store who lets her use his cell phone number on her Lost Dog flyers.

But as Wendy’s confidence, savings and dreams dwindle, despair creeps — painfully. “Wendy and Lucy” is a simple story that succeeds in showcasing the isolation and exclusion in a society obsessed with false connections.