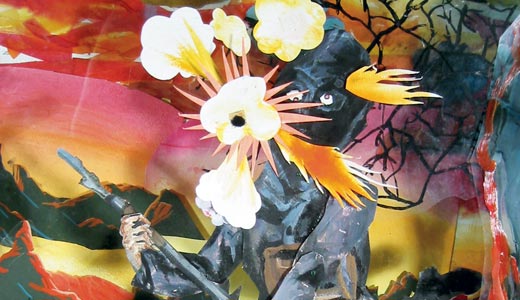 Animator, muralist and painter Martha Colburn deals in confusion. Delve at all into her public life and you’ll find very little outside of her art. Photos and biographies are rare. Interviews are terse and indistinct. Her influences are kept closely to the vest.

In fact, any sort of self-promotion seems to be completely at odds with her artistic process. She is, in many ways, the exact opposite of a celebrity artist like Damien Hurst.

Maybe that’s why she blew off our interview last weekend.

Anonymous or not, show or no-show, Colburn cannot be ignored. Her work has been shown at the Museum of Modern Art and the Whitney. Her films have been screened at Sundance, Rotterdam Film Festival and the New York Underground Film Festival. And she’ll be at Louisville’s 21c Museum Tuesday to discuss her work.

To understand Colburn, you must turn to her art. Her short films are essentially moving collages, where familiar images — be they cowboys, Puritans or pornographic women — are layered until they become unfamiliar ones. You can actually see her scrawling on the images with a pen. The results are purposefully disjointing, but they also allow the audience to make new connections and see familiar images in new ways.

Colburn’s earliest films began appearing in the early 1990s. They were raw, kinetic and seemingly as influenced by the music of New York as its visual artists. Set to musicians like Half Japanese’s Jad Fair, they had the rough aesthetic of a concert poster and the satirical appropriation of early punk album covers. “Asthma” takes an anti-smoking film and actually makes it pro-smoking.

She hit a second peak later in the ’90s when she began working more openly with images of sexuality. One depicts orgasming women transforming into devils. The symbolism could at times be obvious (and others completely baffling), but those films also had an almost feverish intensity.

Then, in the days after 9/11, Colburn turned to more overtly political filmmaking, especially as it applies to the American psyche in the age of the War on Terror. And here she made her more engaging, mature works.

In “Myth Labs,” she traces the history of Christianity in the New World, as Jesus floats along with the Mayflower, eventually infecting North America. Although it’s an indictment of American cultural hegemony, it is a remarkably poetic and engrossing short film, as well. It’s like a historical reenactment filtered through dreams and old books.

“Don’t Kill the Weatherman” takes medieval plagues and places them side-by-side with modern tribulations, like war and environmental degradation.

Colburn’s strongest work is probably “Destiny Manifesto.” It begins as a survey of the Wild West, all gunfights in the noon sun, but slowly morphs into a commentary on Iraq. The dead Indians become Muslims. It’s a fascinating parallel: Remember that westward expansion was justified as an instrument for the growth of Christian civilization, and the invasion of Iraq was part of a larger effort to “drain the swamp” of that troublesome Middle East and replace it with American-style capitalism and democracy. The results in both cases were bloody and regrettable.

Colburn has turned to slightly more conventional work in recent years. She provided the animation sequences for the lauded documentary “The Devil and Daniel Johnston.” Her video for underground indie rockers Deerhoof has them literally consumed by money and fame (not that there’s a chance of that happening). In these films, you’re reminded of a basic aspect of Colburn that’s easy to miss: Her films are often quite pretty.