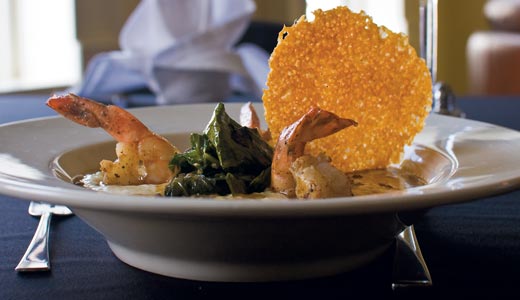 In the Old West, a throwdown was an invitation to come out and fight.

In modern culinary times, resurrected by Food Network’s popular Chef Bobby Flay, a throwdown has become something decidedly more civilized, but still with plenty of posturing and inflated claims.

Cooking throwdowns are a frequent occurrence among the foodies, chefs and restaurateurs whose online personas hang around the LouisvilleHotBytes.com Restaurants Forum.

Last week, the biggest throwdown yet brought chefs from 13 area restaurants together at Captain’s Quarters for a shrimp-and-grits throwdown, a competitive cooking event that attracted a capacity crowd of 250 spectators and raised nearly $5,000 for Families for Effective Autism Treatment (FEAT).

A remarkable team of volunteers pulled together to make a major event happen seamlessly, and it was my pleasure to serve as one of the judges, along with Chef Dean Corbett of Jack’s, Equus and Corbett’s An American Place, and Chef John Castro of Winston’s Restaurant and Yang Kee Noodle. DJ J.J. Jackson of 100.5 Louie FM was the master of ceremonies.

While the judges worked, revelers went from chef’s table to chef’s table tasting small samples. Judges evaluated one dish at a time, scoring specially plated portions presented “blind” with no information indicating who prepared it.

Although most of these dishes were prepared especially for the event and don’t appear on the restaurants’ regular menus, I thought you might enjoy reading my judge’s comments. Note that I’m a tough judge, and plenty can go wrong in intense, fast competitions like this. Any negative comments about specific dishes here should not be extended to the restaurants. Indeed, if any of these 13 turns up on a menu as a daily special, I’d grab it in an instant.

So, here’s the tally:

First out of the box, Chef Thomas and team impressed with an offbeat creative spin on the Low Country confection, turning it into a sort of shrimp tamale, with a masa-like grits base surmounted by fine shrimp, plated on a corn husk and sauced with a fiery reddish-brown concoction that resembled chile colorado more than red-eye gravy. It was a great leap of innovation, but a step too far for the judges; the heat-to-flavor ratio also seemed a bit out of balance.

The grits were creamy and delicious, but the spirit that carried the crowd’s choice didn’t make it to the judges’ table. My sample arrived lukewarm, and the shrimp were tough and overcooked.

Dennison is a good buddy, and I suspected his touch when the server told us to “eat the orange zest before tasting the rest” in this beautifully artful “deconstructed” dish. Stripes of orange and green, a tubular extrusion of grits and a row of perfect shrimp all scored; but an excess of fiery spice lost a critical point or two on my score sheet.

An outstanding, down-home version as I would expect from the Smiths of Shady Lane. Alas, in competition, small things count, and my ration of grits was lumpy.

Standing tall against some seasoned peers, young McMillan signals that this recent New Albany arrival is a force to be reckoned with. Shrimp and grits were both prepared well and served hot; a dab of country-style collard greens on top put a sharp underline on the dish. Tied for second in my ratings; overall the judges ranked it first.

Ward is the chef who introduced Louisville to shrimp and grits, heretofore a Low Country specialty from the coastal Carolinas, when he put it on Jack Fry’s menu in 1995 and started a local food trend. He’s still got the moves, with a good rendition that would have hit my top three … if only the shrimp had not been rubbery and overcooked.

On looks alone, this spectacular presentation might have carried the day, with a combination of peeled jumbo shrimp and a pair of langoustine-size prawns with heads, tails and feelers in place, evoking a Cajun shrimp barbecue. The bad news? The grits were dry, and a funky scent signaled that the prawns were distinctly not fresh.

Another disappointment from a usual favorite, perhaps a problem with time lost between plating and reaching the judges’ table, overdone shrimp and lukewarm grits cost valuable points.

Beautiful appearance, preparation and cooking with one fatal flaw: Two of the oversize shrimp remained raw inside, wet and gray.

Chefs Steve Bryant and Corey Watson, Son of a Sailor

Another recent arrival, this La Grange seafood eatery scored with an excellent, straightforward rendition of the Low Country classic. I ranked it No. 4.

Tied for second on my tally sheet, the components were perfect, with aggressive plate decoration that put me in mind of a Jackson Pollock.

As comfort food, this filling dish with perfectly prepared shrimp and quality grits might have ranked No. 1. However, its offbeat preparation using a molten, cheesy sauce that fell somewhere between Alfredo and Welsh rabbit went a little too far afield for me.

Small, sweet shrimp were quick-fried crisp, then gently placed atop coarse-textured, old-fashioned grits (surely from Kentucky’s Weisenberger Mill) and served piping hot, garnished with a tiny sunny-side-up quail egg as a tasty, offbeat punctuation mark. My No. 1 rating, the panel’s No. 2.

Interested in future eats throwdowns as a participant, sponsor or guest? These events frequently pop up virally on the Louisville Restaurants Forum. To monitor and participate in the forum, click to LouisvilleHotBytes.com, then click FORUM in the row of links just below the skyline banner.

Fat Tuesday is approaching and the revelry continues in River City.

From Bayou to Lou Lou … we’ll be telling you more about Café Lou Lou’s new Douglass Loup property soon. For now, just a quick Mardi Gras reminder: Lou Lou stands for Louisville and Louisiana, and at this season the accent is on the Louisiana. I recommend the Pasta Jambalaya, a spicy dish of rotini pasta loaded with crawfish, shrimp, sausage and Cajun spice. It’s $8.75 for a generous ration that’s jokingly called “small,” and $14.75 for a bucket-size “large.”