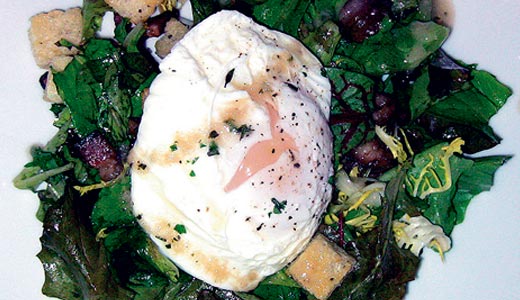 Louisville has always been a breakfast-loving town, it seems, and citizens of Derby City have always had our morning favorites.

From Canary Cottage back in our grandparents’ time to the Baby Boomers’ favorite, Lynn’s Paradise Café, and on to such modern attractions as the lovably urban Toast on Market and Wild Eggs (which just opened a second shop in Westport Village), we’re accustomed to queuing up and waiting, happily and patiently, for weekend breakfast or brunch.

You might find me in line at any of those spots on any given weekend. But you’re even more likely to find me at my top breakfast favorite, Meridian Café in St. Matthews. I honestly cannot understand why Meridian, which always has a cozy crowd of regulars, hasn’t developed the kind of cult following that prompts supplicants to line up outside the door.

Chef Mike Ross offers up excellent cooking and a creative breakfast-and-lunch menu (breakfast items are served all day, which is 8 a.m. to 3 p.m. on Meridian’s clock). With its cozy old-house atmosphere and prices that look right even during a recession, Meridian stands shoulder to shoulder with the competition — maybe even a frog hair above it.

We must have eaten at Meridian a half-dozen times recently. Here’s a quick look at some recent favorites.

“Big Dave’s Pastrami Hash” ($6.75) is a hearty hash of pastrami, fried potato chunks, onions, Roma tomatoes and shredded Swiss, a deliciously filling dish so generous that we brought home a box with enough to share for dinner or the next day’s breakfast, maybe with an egg or two on top.

“Maddy’s Bagel Sandwich” ($8.75) was a little more refined and equally delicious: a bagel (from Breadworks, not bad) with a thick slice of salmon topped with a ration of wilted spinach topped by an over-easy egg, plated on a pretty swash of basil oil. It was good. Very good. You can’t pick up a sandwich like that, but I ate it with a knife and fork and didn’t stop until I was finished.

“Connor’s Gourmet Peanut Butter Panini” ($6.75) was my sister’s choice on a recent visit, subjecting her to some hilarity, but the Elvis-style mix of bananas, peanut butter and berries on panini-grilled whole wheat put another breakfast trophy on Meridian’s shelf.

Another of my consistent favorites, the “Meridian Breakfast Wrap” ($6.75), stuffs a tender green spinach tortilla with a billow of fluffy, light scrambled eggs, a ration of small black beans and a mix of cheddar and provolone cheeses. Served with fresh salsa, it’s a filling treat with a light Mexican accent.

Another dish that keeps bringing me back is “Lior’s Lox Plate” ($8.75), an artfully plated breakfast that comprises a rosette of pink smoked salmon on an oval plate with three cubes of cream cheese plus rations of sliced red onions, tangy capers, thin-sliced Roma tomatoes and lemon wedges, along with a grilled plain Breadworks bagel to spread it all on. I added the fruit option on the side to make it look healthy.

They have great lunch choices, too. Breakfast or lunch, recession-proof prices — it’s tough to top $20 plus tip for two — make Meridian Café a big winner in my book.

Maido Essential Japanese, one of my favorite local restaurants, gained a little extra dab of love with their recent “appreciation menu,” which expresses gratitude to the Clifton spot’s customers by offering a good selection of their Japanese goodies for — get ready for it — $1, $2 or $3 a plate. “You can eat yourself silly for under $20,” said Gary, a LouisvilleHotBytes.com restaurant forum participant. “I feel guilty when my bill arrives.”

We were too busy with the chopsticks to take detailed notes, but covered the table with small plates that included an amazingly aromatic lemongrass soup, crunchy but light vegetable tempura, a deeply flavored, garlicky eggplant stew, and a good selection of sushi that ranged from traditional tekkamaki (tuna roll) to a Maido creation called the Migrating Highlander Roll that’s stuffed with crab, rolled in tempura batter and fried.

With two excellent draft beers from Maido’s superior list, the bill only reached $26, which provoked some guilt. I suggest tipping on the usual value, not the reduced price — servers work hard and need a little extra help in these times, too.

The departure of longtime Chef Daniel Stage and the arrival of an economic recession have conspired to prompt a gentle menu realignment at Le Relais, Louisville’s longest-lived French restaurant and consistently a contender among the city’s top 10 tables.

We dropped in on a brisk winter evening for dinner with a visiting wine maker (Essel Bailey of Napa’s Knights Bridge), and found a revised menu bearing the moniker Le Relais Bistro Français. Bistro? This term — often “Bistrot” in France — evokes a modest, hospitable eatery serving well-made but simple fare.

That would mark quite a shift for Le Relais, with its quarter-century reputation as one of the city’s most elegant — and expensive — eateries. To be frank, it’s still a far cry from a bistro. There’s been no change in its lovable art deco decor (and we hope there never will be); the menu still looks spendy among the Plats Principaux (main courses), although prices have come down some, ranging from $19 to $29.

I went upscale with a near-divine foie gras (so sue me) appetizer special served as a main dish, but stayed on the bistro track with a Salade Lyonnaise ($10), a perfectly constructed salad with bitter frisée lettuce, crisp croutons, crunchy lardons of bacon, all tossed in a fine Dijon vinaigrette and topped with two perfect fried eggs.

Dinner there is still like spending the evening in France, but now it costs a little less.

A number of places around town cause a gustatory problem for me because two (or three or four) favorites sit practically side by side, setting me into a vibratory state of indecision as I try to decide where to eat.

This new spot on the north side of Jeffersonville makes it easy, though: The other day, we drove up to Buenos Dias Café, a Latino favorite, and discovered an inviting new barbecue joint had opened just next door.

Problem? Not! We enjoyed a good lunch of Mexican and Honduran tamales at Buenos Dias, then repaired next door and summoned a rack of ribs to take home for dinner.

Very tasty ribs they were, too ($9.99 for a six-bone slab), spicy but not fiery with a subtle dry rub and tangy sauce cooked in. They were meaty and firm, surprisingly clean of fat for this naturally adipose treat.

A couple of small tables are on hand if you just can’t wait to dig in, but it’s primarily a takeout environment, run by very friendly people who clearly know their ’cue.