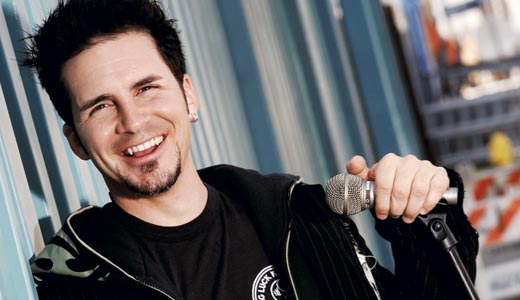 When I surveyed my friends to see if they knew who Hal Sparks was, I got myriad responses, which probably speaks to how busy this guy keeps himself these days:

“Oh, that’s Michael Novotny from ‘Queer as Folk.’ Tell him I love him! OMG, ask if he’s single.”

“You get to talk to the funny guy from all those VH1 ‘I Love the ’80s’ specials? Ask him how he truly feels about Alf.”

These are just a few projects Sparks has been involved with since moving to Chicago, and later Los Angeles, from Peaks Mill, Ky., outside of Lexington. Included on his résumé, besides the above, are the Nickelodeon cartoon “Tak & the Power of Ju Ju” (he plays Tak); frontman of the band Zero 1, which recently released its debut album and has another in the works; and an upcoming series on VH1 called “Unreal.”

Sparks fashions himself an old-school comedian. He remembers listening to his dad’s comedy records — Richard Pryor, George Carlin, Jonathan Winters, Shelley Berman — for entertainment while growing up in Peaks Mill, where his family had no TV. “My material is always new, but my sensibilities are older,” he says.

LEO Weekly caught up with Sparks last week to chat about coming home, reaching success and all things love.

LEO: Are you looking forward to coming back home?

Hal Sparks: The nice thing about playing Louisville is that I’m an hour’s drive from my parents and sister. When I perform in Kentucky, I usually only perform in Lexington, so it’s cool I get to perform in Louisville for the first time.

HS: It just takes packing your stuff and going. It’s a lot easier than you think. It’s a mental decision — like most things. If it matters to you and is what you want to do, you just gotta go. That’s the nature of it. That’s true of practically any high-reaching goal. I wanted to make my environment match my goals; otherwise you’ll spin your wheels forever. I was lucky in that I moved from Kentucky to Chicago before I came out here, because it was a great city to learn comedy.

LEO: With so many different projects, do you have a favorite?

HS: Not really, because they’re all ferociously different. It’s kinda like asking somebody what they like better: eating or breathing? You can probably do without one over the other for a little bit longer, but as soon as you can’t do either one anymore, you really miss it. It becomes crucial.

LEO: What topics do you cover in your standup?

HS: In the last year or so, my focus has been on how we talk to ourselves. We have a lot of preconceived notions in our culture, a lot of assumptions that everybody has just operated on that are completely false — and I’m not just talking about banks are a good place for your money. More in dealing with our relationships with each other. In an effort to get us back to a good starting point, you kinda have to pare down false preconceptions about stuff. I think that’s my job as a comedian — you make it fun, you make it silly, but really, it starts with language.

I come from the George Carlin/Steve Martin school of standup, where you have to do a lot of thinking and a lot of work on your standup, as opposed to just letting it loose on improv and hoping it’s good. I tend to like to bring a show.

LEO: OK then — let’s bring it now. Since you’ll be here on Valentine’s Day weekend, I’m going to hit you with a few questions on love. First up — Who wrote the book of love?

HS: Actually, it’s a DVD now, because they don’t even use the Book of Love anymore. They have an audio Book of Love, which I don’t recommend, especially while driving. I like to think I rewrote the Book of Love, if you know what I mean. I don’t, but you might. So I’m going to take authorship credit right now until someone else comes along and tries to bump me off. Imagine the competition, though — a “love-out.”

LEO: Who put the bop in the bop-shoo-wop-shoo-wop?

HS: I think Bowzer from Sha Na Na. I’m fairly certain he invented that — that’s why he’s still around. It might have been Nikola Tesla, though, because he did most of the things he never gets credit for.

LEO: What’s love got to do with it?

HS: It certainly makes it easier. But sometimes it slows things down. That’s all I’m sayin’.

LEO: Why do fools fall in love?

HS: For the money. And mainly I think it’s because they really don’t have a bigger goal in life. They’re not really goal-oriented. They don’t have a five-year plan, so they just fall in love to fill their time.

LEO: Where do broken hearts go?

HS: To the shop, I suppose. I’d say in the trashcan, which is more honest. Most people with broken hearts will try to tape them back together with duct tape a couple of times, but mostly you just chuck ’em. “Forget it — I’m done with love!” And then somebody shows up with a new one, and you’re like, “All right, but just this once.”

LEO: Do you like piña coladas or getting caught in the rain?

HS: Well, since I don’t drink, I would prefer getting caught in the rain. And of course it depends on what I’m wearing. If I’m wearing something white and sheer, I’ll duck under an awning.

LEO: How can you mend a broken heart?

HS: I think a lot of people use piña coladas. Personally, I just go back out in the rain. For me, a session of “You are really awesome” in the mirror does it.

For the record, though, if we’re going to go this way, I did not give love a bad name. I did not. I think that was Britney Spears, ironically enough. And I will not love, love your do. That’s not going to happen.