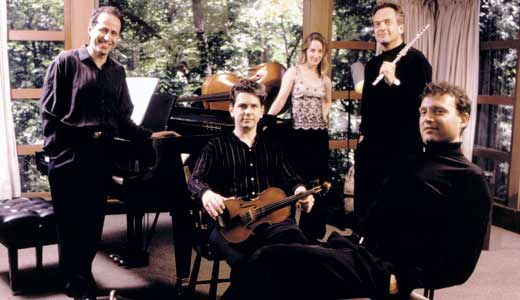 The key to Copland House is in the playlist.

Sunday at U of L, the chamber music ensemble Music From Copland House presents a program of four famous American composers: Currier, Copland, Prokofiev and Dvorak.

Well, technically, just Sebastian Currier and Aaron Copland hail from this side of the sea, but the subject is American music, and the title of the program is “From the Old World to the New.”

Music From Copland House is the ensemble-in-residence of Copland House, a foundation for furthering American music, based at the home of the 20th century composer Aaron Copland (1900-1990). Copland was the creator of such familiar American works as “Billy the Kid,” “Appalachian Spring” and “Fanfare for the Common Man.” The composer’s Prairie-style home, now a National Historic Landmark, is set high in the wooded hills above the Hudson River, near Peekskill, N.Y.

“The house is just beautiful up there, and a real retreat,” says cellist Wilhemina (Mina) Smith, one of the founding members and five core musicians of Copland House.

But it’s not a commune for longhaired musicians. Smith and the other Copland House players live in New York City, where their performing careers are based.

“None of us actually live in the house,” she explains. “It’s used to host composers who win, or earn, you might say, a stay at the house for several weeks. There, the composers enjoy solitude and quiet, in an absolutely beautiful setting.”

“A lot of works come across our desks and across our instruments, and we try to find ways to present them — to give a new perspective on the old and the new. That’s what this program is about.”

The program’s playlist begins with Antonin Dvorak, an Old World Czech whose most famous work is probably “Symphony From the New World.”

“Dvorak is really the great-grandfather of American composers,” Smith explains. “He was invited to come to New York to start a new national conservatory of music. Along the line, he encouraged American composers to look into their own native music. He became known as a colleague and champion of young composers in this country.”

Copland himself is represented with a sextet that began as a symphony — not very happily.

“There is a story that the first people who tried playing the symphony said, ‘Sorry, it’s too hard to play,’” says Smith. The piece was mercifully re-orchestrated as a sextet. “We can pretty much play it in our sleep now, we’ve played it so many times. It’s a fun piece and quintessentially Copland. So rhythmic. Very spirited.”

The cellist is also enthusiastic about Sebastian Currier’s “Static,” winner of the 2007 Grawemeyer Award. “We premiered and recorded it, and of course, it has the connection of the Grawemeyer Award and University of Louisville. It’s very intriguing — and hard to describe. It’s about all the sides of … static.”

And how did Sergei Prokofiev get into all this? The Russian composer skipped over to the United States for two years when the Russian Revolution began in 1918.

“Prokofiev wrote the piece for fellow Russian émigrés he knew in New York.” she says. “Beautiful clarinet writing. Not a long piece. Just a series of Hebrew melodies.”