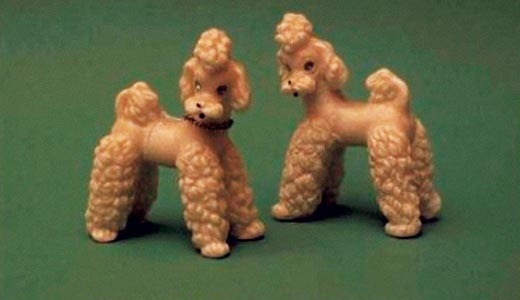 This is not your typical romance novel.

Although it relays an everyday tale about the rise and fall of a relationship, the method used to tell this story is extraordinary. In compelling detail, Leanne Shapton chronicles the failed love affair of a fictitious couple in the form of an auction catalog.

Rather than recount the course of the relationship in narrative form, Shapton paints a vivid picture using photographs of the pair and their possessions — some valuable (a vintage leather chair, an Hermes wristwatch), some worthless (half a wishbone, a stack of hotel key cards) and some utterly bizarre (a pair of dachshund salt-and-pepper shakers).

The book begins with Lenore Doolan and Harold “Hal” Morris meeting for the first time at the Halloween party of a mutual friend. One of the first items up for auction is a photograph of the soon-to-be couple taken at the party, with Lenore dressed as a blood-spattered Lizzie Borden and Hal as Harry Houdini.

A passionate romance blossoms, beginning with the usual courtship rituals: making mix CDs, exchanging flirtatious e-mails, loaning favorite books with notes scribbled on the inside cover, all of which are among the items to be sold at a Valentine’s Day auction.

Perhaps most remarkable is the author’s use of intricacies, such as listing the exact contents of Lenore’s cosmetics case and displaying Hal’s extensive T-shirt collection, which includes one the couple dubbed “the sex T-shirt,” as wearing it indicated a desire for sex.

After the first few pages I was hooked, engrossed in the lives of Lenore, a New York Times food columnist, and Hal, a roving photographer. This catalog of possessions reveals quirky, charming and ultimately heartbreaking things about the couple’s four-year relationship as it slowly unravels. —Sarah Kelley

What an odd little book. Priest often writes modern takes on Southern Gothic. She’s previously done well (in “Four and Twenty Blackbirds”) with conflicted heroines and people who see ghosts. There’s some ghost-watching in this short novel as well, but at heart it’s more like historical fiction met up with a dark, fantastic quest novel.

The historical fiction here shifts between the cutting of the Wilderness Road by Daniel Boone’s party in 1775 and the close of the 19th century, when feuding sides of an extended family are called upon to combat something mysterious deep down in a Kentucky limestone cavern.

It’s no spoiler to point out that a monster interrupts the quest. This beast, of unknown origin, acts as the 600-pound (feathered) gorilla in the middle of the room, so the author can work magic around the edges — with metaphors involving cul-de-sacs and dead air in caves or ricocheting bullets that don’t care whose cousin becomes collateral damage.

The story is solid and economically told, except for some overdrawn action and thrills. No characters are simple black-or-white, even when they’re little more than chum for the winged menace. Boone (who apparently pops up in the author’s family saga, providing the genesis for this work) wears no halo but shows fortitude and a sense of responsibility for those around him. Those same traits lead to the happiest moments of the conclusion — which is spelled out quickly, leaving pieces to be sifted once the book is closed. I wish more authors would similarly trust their readers, but I wish this author didn’t also tilt sympathies toward characters who worked their way out of Kentucky. —T.E. Lyons