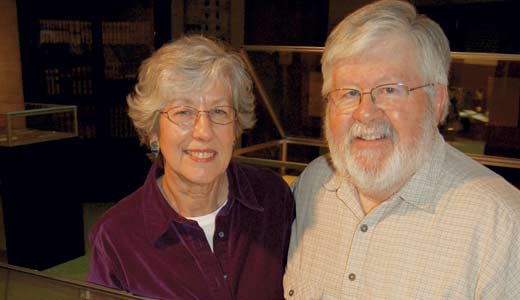 Collectors across the world tend to have one thing in common: a fixation on the appreciation of value. They crave the hunt, the chase, the challenge. Just as there are Bordeaux collectors with no plans to uncork their wine bottles, there are coin collectors counting the days till eBay outbids itself. And there are book collectors who refuse to crack the spines of the books they buy.

Robert H. Miller is not one of these. Longtime chair of the English Department at the University of Louisville (where he is now Professor Emeritus), Miller is a man who not only has a passion for rare and valuable books, but who also actually reads them. How many he has read is almost unfathomable, particularly when you consider that during the decades he was collecting his first editions, he was simultaneously teaching graduate and undergraduate courses far afield from his modern interests.

How he managed to accomplish all of this as well as keep up with his academic scholarship, his fondness for fly-fishing and game hunting, and (along with his wife Diane) raise three daughters, may be inexplicable.

What is easier to understand — especially if you venture out to take a gander at it yourself — is the exhibition of more than 400 first-edition books Miller has donated to the Kain Rare Books Gallery in U of L’s Ekstrom Library. In addition to extensive collections of books by Evelyn Waugh, Graham Greene, Elizabeth Bishop and Cynthia Ozick, the exhibit includes proof copies, unfinished manuscripts, letters and first appearances in print of works by Shirley Jackson, Sarah Orne Jewett, Marianne Moore and Richard Wilbur.

The equal number of male and female authors represented is not a feat of political correctness. Bob Miller is every bit as fervent about the poems of Marianne Moore as he is about the spy novels of Graham Greene. Mention a Moore title to him, and he can quote almost any poem in that particular collection. Bring up Elizabeth Bishop’s long-standing relationship with Robert Lowell, and Miller asks, “Do you know Lowell’s poem ‘Waking in the Blue?’” If you don’t know it, you’ll make sure you do soon.

There is a line from “Waking in the Blue” that itself seems emblematic of Miller’s generous donation. “What use is my sense of humor?” asks Lowell’s speaker, about awakening to find himself in an asylum. A perusal of the exhibit’s titles indicates that humor and irony figure heavily into the worldview on offer. A man given to Mencken-like quotes such as, “Never underestimate the power of human stupidity,” naturally gravitated toward authors who have, as Miller explains, “an extremely powerful social-critical eye.” They are people “who cannot be hoodwinked or conned.”

Miller was not born into an academic or literary family. As he described in his 2004 memoir, “Deaf Hearing Boy,” he grew up the oldest of four children with deaf parents in Defiance, Ohio, a small agricultural community. In 1942, the family moved to Toledo so that Miller’s father could find work as a member of Roosevelt’s “civilian army.” But when the war was over, returning soldiers displaced all the deaf workers, and the family, close to destitution, returned to the farm in Defiance, where they endured small-town bias against what was perceived as a handicap that could be passed down for generations. As Robert Miller excelled in school, higher education became his saving grace. It was while he was in graduate school at Ohio State, under the tutelage of a beloved professor who had a collection of first editions of F. Scott Fitzgerald, that Miller turned his eye toward collecting. His bible was “An Introduction to Bibliography for Literary Students” by Ronald B. McKerrow.

Delinda Buie, curator of Rare Books at U of L, has Miller’s 1927 annotated edition of McKerrow’s book, which she holds dear, not least because of its inscription: “I hope, some day, after I am gone, that this book will reflect to someone the diligence of my efforts in this discipline.”

Miller is not gone. And the exhibition does reflect the diligence of his efforts. The plain fact is that these editions are marvels to behold. According to Buie, book publishing had its heyday in the early 20th century. The illustrations alone in many of the books outdo what readers expect from even the most sophisticated “graphic” fiction writers. One of the most difficult decisions, Buie says, is whether to show the closed cover or the interior pages of a given book. Each is so artfully crafted.

Miller began his collection with Graham Greene. He bought his first Greene novel for $3. (Common decency precludes stating what this particular book is worth today.) During the war and immediate post-war years, many books were published using cheap, fragile paper. In some cases, this only serves to increase their current value. As Miller’s interest in collecting grew, so did his means of engaging in the practice. In the old days, it was mainly a matter of combing through used bookstores or waiting for phone calls. Eventually it came down to wading through catalogues. Finally, the Internet made collecting far more accessible, while at the same time increasing the chances for fraudulence.

But a seasoned collector knows how to maneuver his way around such obstacles. So why give it all away? Don’t his daughters want to inherit any of the goods? Well, for one thing, Miller has copies of the books he most prizes. And his children told him they wouldn’t know what to do with such a huge collection. The whole family agrees that the books are best off housed where they will be best appreciated and looked after — in perpetuity. You can’t ask for a more hopeful shelf life than that.

The opening of the Robert H. and Diane Miller Exhibit coincides with the commencement of U of L’s Conference on Literature & Culture. The exhibit will remain in the Kain Rare Books Gallery through May 29.