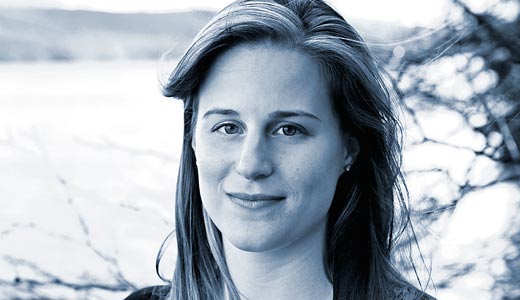 No, this is not the latest memoir by one of those wacky food adventurers from the Travel Channel. It’s the selected short stories of Lauren Groff, whose name you may recognize from last year’s Orange Prize-nominated “The Monsters of Templeton.”

Often it takes a whoop-de-do big sensation to get the smaller literary gems into public domain, but that should be fine by Groff’s legions of fans, as she is equally adept at pulling off both. Even if several of the stories in “Birds” were previously published in various smaller-press outlets, we can still celebrate. The majority of readers, after all, don’t go wading through literary outlets to find their verbal entertainment. This is what collections are for.

If the title calls to mind “Birds of America” (either the Mary McCarthy or the Lorrie Moore version), that may be because Moore was one of Groff’s most influential teachers, though Groff has sworn in an interview that the allusion to the earlier title was unintentional. Still, the influence of Moore is plain to see in the punning title of the story “L. DeBard and Aliette” (a playful/mournful updating of the story of Abelard and Heloise) or in lines such as “even those floozies, the cherry trees, have turned spinsterish in the cold.”

On the one hand, one wants to implore younger writers to cease and desist with the Lorrie Moore emulations. On the other, what contemporary American fiction writer is more worthy of emulation? And if a writer can do it as successfully as Groff — until she arrives at the point where she finds her own voice, her own narrative power — then why not?

This is precisely what Groff achieved with “The Monsters of Templeton,” published before but written after the stories in “Delicate, Edible Birds.” The proof is in the opener of the collection, an outtake of “Monsters” called “Lucky Chow Fun,” in which the teen-girl narrator loses her many illusions about what makes the town of Templeton (a stand-in for Cooperstown, N.Y.) tick.

In a classic example of Groff at the zenith of her form — moving swiftly and gracefully from history to mythology and back to the present moment — the narrator, Lollie (a butterflier on the boys’ swim team), lands on this: “We called our mother’s new boyfriend The Garbageman, though he was actually a Ph.D in garbage science and owned a lucrative monopoly on trash removal in the five counties surrounding ours. He certainly didn’t look like a garbageman, either, being fastidious to the point of compulsion, with his hair combed over a small bald spot on his head, his wrists doused in spicy cologne …”

While “Lucky Chow Fun” has the feel of a chapter that was left out of the final version of “Monsters,” it works as a self-contained unit. And if you haven’t read “Monsters,” there could be no better impetus to turn to it after reading this first story. The same cannot be said of a few pieces in the middle of the collection, the aforementioned “L. DeBard and Aliette” being a case in point.

What Groff has shown in her best writing is that she has a flair for making history so alive that the reader feels it barreling into the present and, sometimes, even into the future. She’s so good at it, in fact, that in a story such as “L. DeBard and Aliette,” a tale of two lovers in the midst of the 1918 Influenza epidemic, she only leaves you wanting more. Much more. The story comes across as a sketch for a novel. The amount of white space (separating sections of the story) serves to add to this impression.

In contrast, the last selection, the title story, is the most intense, self-contained piece in the book. A synopsis of it will make it sound as if it, too, should be a novel — perhaps one written by William Boyd or John Le Carre — yet Groff succeeds in 40 pages at telling the story of five foreign correspondents (four men and one woman) trapped in the countryside of France by a farmer who is a Nazi sympathizer. The bargain the Nazi wants to strike with them is so odious and reprehensible that at the outset none of the journalists can bear it. Trapped in stinking darkness, starving and desperate to save their own lives, they gradually begin to shift alliances, turning on one another.

The androgynously named “Bern,” the lone woman character, is the story’s beating heart. When you come to the end, you realize that she, like the rest of Groff’s many memorable women characters, is neither delicate nor edible. She’s a firebrand.