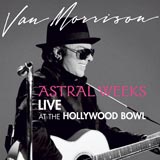 Among the artists that followed the British Invasion was Van Morrison. “Gloria” became a garage rock classic, but who knew his solo career would still go strong? After 1967’s Blowin’ Your Mind, which has been endlessly repackaged, Morrison stunned the music world with his 1968 masterpiece, Astral Weeks. Full of poetry, jazz, strings and deep emotion, it began a run of albums that were critically acclaimed and popular. In November 2008, Morrison revisited and reinterpreted the album for two triumphant nights at the Hollywood Bowl. The CD presents the entire seminal album, plus two additional songs. Accompanied by an orchestra, Morrison freely follows his muse. He improvises, scats and stretches syllables, and on “Madam George,” he riffs on a word until it becomes a mantra. Despite his on again, off again commitment in concerts over the years, he’s on for this one.