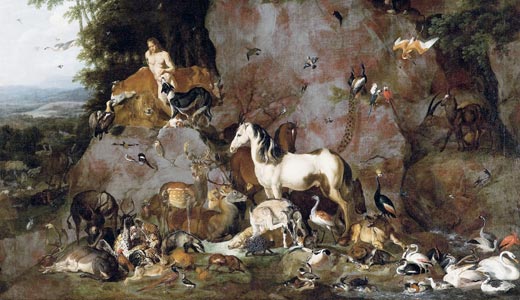 Carl Borromäus Andreas Ruthart is not a name that rolls off the tongue. Unless you appreciate German Baroque art, his name has probably never rolled around in your brain, either.

He was one of the top painters of animals in his day — the 17th century, that is. He is so well known for this in art circles that the Speed Art Museum has acquired one of his more important oil-on-canvas paintings, “Adam Naming the Animals.”

The Ruthart painting is featured in the exhibition “Collecting for Kentucky: A Year of New Art at the Speed.” More than 250 works from the 15th-21st centuries were bought or donated to the museum in 2008, adding to their permanent collection of approximately 13,000 works. Art by some big names, such as Paul Cezanne, Henri Matisse and Louise Nevelson, were gifts; this show’s 52 treasures are just a sampling.

A horse, dog and deer are among the 121 creatures in “Adam Naming the Animals.” The painting is Ruthart’s interpretation of Genesis 2:19-20: “Out of the ground the Lord God formed every beast of the field and every bird of the air, and brought them to Adam to see what he would call them. And whatever Adam called each living creature, that was its name. So Adam gave names to all cattle, to the birds of the air, and to every beast of the field.”

Ruthart was largely self-taught, with a reputation for excelling at his renderings of fur, wool and the anatomy of a large variety of animals. Another specialty was the way he placed the animals in the design, not as accessories but integrated into the surroundings.

His love of biblical scenes, with animals of course, came from his own faith. Ruthart eventually entered the Celestine Order in 1672. He continued to paint after becoming a monk; “Adam Naming the Animals” was completed after he entered the monastery in 1686. He later moved to an abbey in L’Aquila, Italy, where his last recorded work was in 1703.

The painting was purchased with funds from the Alice Speed Stoll Accessions Trust. Yes, she is one of those Speeds, a descendant of the name on the door. Hattie Bishop Speed founded the J.B. Speed Memorial Museum in honor of her husband, James Breckinridge Speed; it opened in 1927. Speed’s granddaughter, Alice Speed Stoll, bequeathed the museum more than $50 million in 1996. It is one of the largest monetary gifts ever given to an art museum, and it propelled the Speed Art Museum into a place among the top 25 museum endowments in the United States.

While you’re there, be sure to visit “Reclaiming the Plate: 19th-Century Etching Clubs” (through March 15) and “American Art at the Speed” (through May 31).

‘Collecting for Kentucky: A Year of New Art at the Speed’