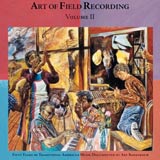 This four-disc set, the brainchild of archivist Art Rosenbaum, is a staggering collection of American roots music performed by amateur musicians in nonprofessional recording environments. Disc one, Survey, is arguably the best and most accessible. It comprises bluegrass, country blues, instrumentals and old-time Appalachian tunes that underline the connection between American roots music and European folk music traditions. The all-gospel disc two, Religious, and the entirely a cappella disc four, Unaccompanied Songs and Ballads, feature songs in the arrhythmic field holler tradition. At best, these conjure the haunting, middle-of-nowhere atmosphere of classic ’20s and ’30s blues recordings, but the fidelity is superb, having been recorded between 1956 and the present. Evocative isn’t the word — these recordings are the essence of the atmosphere they evoke.