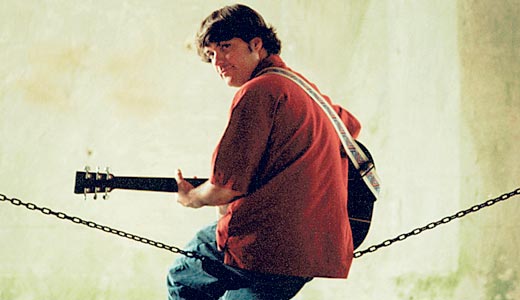 The Alvarez Avante Baritone’s home is a $1,000 custom case, way more than the guitar’s worth. Equal protection goes to the Martin HD28 — “High Diva,” as Keller Williams calls it — as does his 1936 Gibson L00, which his wife drained her bank account to buy. These have their own bunk on Williams’s tour bus. The Mrs. and his two kids ride with, but these days, “children” can mean any number of things.

Anyone who caught Williams’s NonComm performance at the Brown a couple years back witnessed a one-man dervish of guitar and synth loops ricocheting around the concert hall. But no man is an island, and Williams’s newest live CD/DVD pairs the fret freak with Aquarium Rescue Unit drummer Jeff Sipe, Gibb Droll and String Cheese Incident’s Keith Moseley, whom Williams met and opened for touring frat houses and blues bars in the ’90s.

“Like almost everything in my career, it’s very self-indulgent,” Williams says. “It’s very much a dream band.”

After a brief West Coast tour with the WMDs, Williams pressed on solo voce. So where are the other three? Their absence is by design. “I never really tour to support any kind of record,” he says. “Records are a way for me to document what I’m doing, what I’ve done. This tour that I’m doing now — I’m setting up the stage like a guitar store, focusing on the solo side of things.”

The well is deep: more than 200 songs spread across 14 records, not including covers. In bad economic times, it’s solo Williams, he explains, characterizing the band setup as a can-do-when-possible scheme forced to the sideline in part by gas prices, fees and technology’s permanent alterations to the music biz.

“For several weeks, when diesel prices were nearing $5 a gallon, and then having topnotch players out, financially it became very straining,” Williams says, but, “I’m very proud of being able to pull that off.”

Known for allowing bootlegging of his shows, Williams says he’s come to grips with the way things are and is altering future recording plans to stay current.

“It’s taking me a long time to come to grips with technology in the way of the losing of the art of the album, the 12 songs in order, whereas now, everything’s chopped up, and people can get what they want, which I can relate to — the short attention span of the public,” he says. In the next year, he’s planning a subscription model and offering a download each week.

“There’s not gonna be any rules in the beginning, as opposed to just making up 30,000 copies of something. You can still do that, but put more focus on the download and try to keep up with what’s happening today. My world revolves around touring, the record sales is just gravy.”

A kids record is in the works: “It’s gonna contain a warning: Not suitable for uptight parents over 40.”