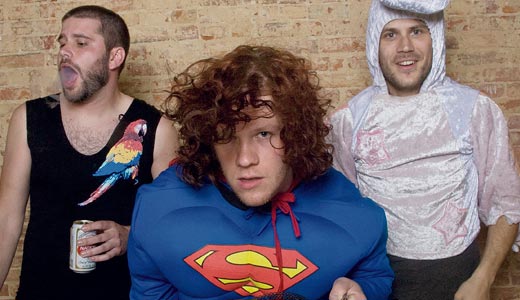 Never set off fireworks in the ghetto.

That is the public service announcement brought to you by Jeremy Johnson, Drew Osborn and Brandon Duggins, collectively Workers.

The Band Formerly Known As Your Black Star turned Duggins’s routine birthday celebration into an outtake from “COPS,” failing to heed engineer Erik Wofford’s advice to set, then scram, and winding up on the wrong side of some handcuffs. Austin’s finest promptly informed the revelers that gunshots bear a striking resemblance to an M80, the handcuffs were begrudgingly removed and the dudes were left to their own devices.

You could hardly blame them for feeling mischievous — Duggins’s 29th cumpleaño coincided with the completion of the band’s self-titled album, their follow-up to last year’s Beasts, under the past moniker of course.

Workers explodes with the band’s trademark delay-drenched ethereal pop rock, a progression that has taken the band eight years and several incarnations to achieve.

“Motown did it best,” says Duggins, an avid science-fiction reader who joined the band shortly before it shipped off to Australia, Japan and New Zealand in 2006. “Lay down a groove and build everything on top of that.”

“We were heading that way. Even if you listen to Beasts, we were simplifying arrangements and grooves,” says Johnson, 27, who is training for the upcoming Derby marathon. A wine fanatic, he’s also toying with the idea of becoming a sommelier. “You have to taste first-growth Bordeaux and be able to tell what tiny region of France it’s from,” he says.

The band was set to record Beasts with Kurt Ballou, who helmed Coliseum’s Relapse Records debut, No Salvation. A couple months before, Osborn heard The Black Angels’ Passover and suggested they contact Wofford instead. They canceled their session with Ballou and headed south to Austin, a second home courtesy of the band’s multiple South By Southwest appearances.

Where Beasts was a mean shot across the bow, Workers takes uplifting turns: the near-7-minute “Funeral,” one of the first songs written for the album, is anthemic and driving with huge washes of delay and organ penetrating Johnson’s hushed timbre and backed by Osborn’s steady hand.

“A Heart Beat” is the record’s campfire moment, with layered chants, where lead-off “Revolutions” has a lurching backbeat supporting a call to action.

“Erik’s really more about sounds,” says Osborn, a videographer who spent election night outside Norfolk, Va., filming returns for Al Jazeera. “Forty hours of work, no sleep, and it was raining,” he says.