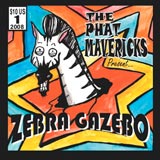 If there’s one thing I can say about The Phat Mavericks, it’s that they’re proficient. They do what it is they do very well. What it is they do, though … hell if I know. It’s like a mash-up between big ’60s groups like Cream and Deep Purple (maybe even a little Jethro Tull) with some Sublime and Frank Zappa mixed in. All played with that all-important “proficiency.”

I mean … I see what the parts are. It just doesn’t add up to something I can get down with. It’s a little too clean and pristine. There’s some wah in there to space it out, man, but it’s just not enough to account for a pervasive undercurrent of self-consciousness. Like they were very much concerned with making sure that this was a little funky, a little weird. I often think the greatest songwriters aren’t the world’s best musicians, and this record seems to prove the opposite is also true.

I bet they’re a real hit at parties, though.