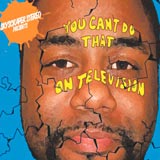 I love the freedom of independent hip-hop. The days of sample-laden albums like De La’s 3 Feet High & Rising are long gone thanks to the so-called “sample police” — law firms that specialize in the worst case of dry-snitching this side of the sandbox (except Girl Talk, who must have sold his soul to release records without being assassinated by rights holders).

For the time being, Skyscraper Stereo is in that gray area where they can get away with clearance murder, and it shows here, one of 2008’s more fun releases. Balanced among headphone fodder, a few car-speaker blowouts and a couple tips of the hat to clubs, Skyscraper leave few stones unturned. Highlights include “Illegal Woman” and “Get By,” in which producer/MC Ju Ju Pap proves himself to be as clever and interesting a rapper as he is a beatmaker.

“502” should be playing once an hour on B96 (“should” being the operative word). It’s a Louisville love song that doesn’t come off as trite in the least. Notice I said “for the time being” above?