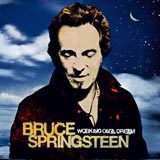 Springsteen’s fans have always wondered what would happen if he and his band cut loose a little more. That seems to be about half of the recipe that was used for this sometimes-subtle collection.

In the best lyrics and arrangements here, these are the tracks of a mature artist looking backward. He wants to see how he can re-craft his earlier inspirations to capture things he’s learned in the years since. Several songs play with the paradox that, while action defines character, our attempts at great romance or legacy are often just ephemera. Opening epic “Outlaw Pete” says this as a poignant tall tale — like a more-direct version of some Dylan ballad. “Last Carnival” tightens up the notion as a gently glorious tribute to late bandmate Dan Federici.

But amid rich observations are some pathetically underdeveloped lyrics. Effervescent choral voices and odd, blippy sounds show that Brian Wilson is now a guiding spirit (as are The Byrds). It all adds up to a welcoming sound, with a big (if still slightly hungry) heart. And an eye toward more mundane forms of mortality than used to be found in the operas out on the turnpike.