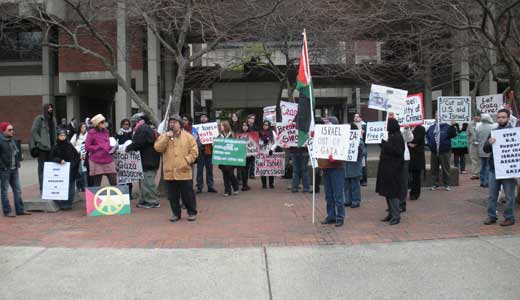 About 100 pro-Palestinian demonstrators gathered Monday at the University of Louisville to protest Israel’s invasion of Gaza, and the rally turned ugly when students with opposing views showed up, resulting in a heated altercation.

Organized by the Louisville Committee for Peace in the Middle East and the U of L Muslim Student Association, the demonstration was intended to raise awareness about the conflict and mobilize the university community to join the international movement opposing the war.

“You can have rallies and sit-ins as much as you want, but nothing’s going to happen until a large group of people get together and pressure Congress and the Obama transition team,” says Lauren Banko, a graduate assistant in the Middle East and Islamic Studies program at U of L who volunteered to organize the students on campus. Banko says pressure nationally and internationally could push Israel into a cease-fire and foster talks from both sides.

“We’ve written an open letter to Congressman John Yarmuth and are hoping for a response, but right now the main pressure point needs to be the president-elect’s transition team,” she says.

With signs saying “Israel: Guilty of War Crimes” and “End Israeli Siege on Gaza,” the group demonstrated between the Humanities Building and Ekstrom Library as students changed classes at noon.

The rally featured a number of speakers who voiced their support for the people of Gaza, including U of L students, faculty, activists and immigrants from Gaza.

U of L Computer Science Professor Ibrahim Imam told the crowd that the history of the conflict in Gaza stems from the origins of the 60-year conflict in the region.

During the rally a few onlookers yelled against the demonstrators’ pro-Palestinian message. One man got into a shouting match with the demonstrators about “burning babies,” while two U of L students stood across from the large crowd holding pro- Israel signs in an attempt to counter-protest.

Mark Talis, 18, and Gariy Ocheretner, 19, began arguing with one of the pro-Palestinian demonstrators, a young woman wearing a traditional Muslim headdress. The confrontation heightened once she ripped their homemade sign away and tore it into pieces.

Both students said they were supposed to be in class, but upon seeing the demonstration they felt compelled to respond.

“We both have family in Israel so this affects us directly,” Talis says. “The fact that they ripped our sign down and they won’t let someone else speak their side of the story that goes completely against everything this country is about. It’s about freedom of speech.”

Talis says he believes the Jewish community in Louisville isn’t as well organized as the Palestinian supporters, adding that there should be more pro-Israel demonstrations.

Unless people have lived in Israel, Ocheretner says they do not understand what it’s like: “Let’s say Mexico launched 20 or 50 rockets into Texas per day. What would America do? Would they not defend American citizens and invade Mexico to restore order? Every country has a right to defend its own people.”

Ocheretner says the young woman ripping his poster is another example of the one-sided narrative of the conflict. After returning from Israel this summer, he says he noticed that mainstream media outlets were not showing the pictures of children dying in Israel.

“I’m just trying to show people that there’s more to the story. I have an opinion too,” he says.

Camyla Wallace, 22, a student at U of L and one of the organizers of the rally, says whenever the subject of Israel and Palestine comes up there is tension. They expected counter-protestors, and she still considered the demonstration a success because they mobilized a diverse crowd to stand in solidarity with the people of Gaza.

“It’s important we have these types of rallies,” she says. “We’ve chosen areas where it’ll spark an interest and connect with people to learn more about the conflict and demand an end to the massacres.”

Wallace’s mother, Sharon Wallace, recently arrived at the Gaza Strip on a mission to deliver medical aid to those injured during the recent Israeli attacks. In conjunction with her mother’s trip, she says, the Louisville Committee for Peace in the Middle East is organizing a benefit concert featuring local poets and hip-hop artists to raise money for the Middle East Children’s Alliance, which will send emergency food rations, medical supplies and a mobile ambulance to Gaza. (The benefit will be held Friday, Jan. 23, from 8-11p.m. at the Rudyard Kipling.)

“A lot of people in the states feel that their hands are tied with an issue so much larger than them,” she says, “but the more people who come out in the streets and are mobilized, the better chance to change public opinion and demand a viable solution.”