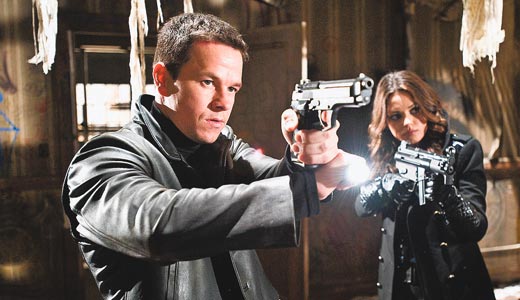 While vidgames-turned-into-movies are a mixed bag (usually quick and shallow) this gamer/graphic novel is definitely an example of profound artistic vision. Mark Wahlberg stars as the titular DEA agent, devastated by the assassination of his family. The rest of the cast — including Mila Kunis, Beau Bridges, Ludacris, Chris O’Donnell and Donal Logue — are all but washed away in the angel-themed visual explosions that result when Max goes after a lethal, drug-fueled corporate conspiracy. Won’t change your life, but provides gangs of noisy, fantastic fun.

We’re not the world’s biggest fans of this franchise, but we have to give it props for its ability to evolve and generate new thrills while keeping its core “values” intact — despite the fact that its protagonist, “Jigsaw,” died several movies ago! Tobin Bell, Donnie Wahlberg and Shawnee Smith recap their roles, and the body count increases, though, sadly, the real star, Billy the Puppet, is seen only in flashbacks. The big-time twisteroo-ending upset a lot of fans.

A young Mozambique woman studies to be a doctor, but her professor demands sex — and a possible HIV infection — in return for her education. Thus life has always been in the misogynistic, AIDS-ravaged African nation. Is she willing to risk everything to save lives?

Wow, this has got to be the highest-concept kidflick since “The 5,000 Fingers of Dr. T.” A city, locked away for generations and lit by thousands of brilliant, glittering lights, begins to lose power, leading two teens to battle a stagnant bureaucracy — led by Bill Murray! — to free the people from superstition and death. Great stuff, with Tim Robbins, Martin Landau and Mary Kay Place.

A wildly popular dead-teenager outing from Norway with a worldwide Internet following. Five teens are holed up in an abandoned ski lodge with a homicidal maniac. Been there, seen that? Not like this you ain’t! Clever, intense and intelligent, with a neat twist ending that makes you wonder why we tolerated all those tired ’80s slashers.

A new Special Collector’s Edition of the best modern romance around. Sexy ghost Patrick Swayze viscerally connects with his hot wife (Demi Moore) to solve his own murder and prevent hers. But who cares? The real fun is all the ways he finds to snuggle up to her, including the now-famous “potter’s wheel” seduction. With Whoopi Goldberg for comic relief.

There are a lot of holy books in the world (to Christians: Surprise!), and most have a chapter on “the end of the world” that usually pits Good Personified vs. Evil Personified. This Bible-centric doc focuses on one of them, which tells of the inevitable battle, exactly where it will be fought and exactly what will happen, step by step. Which begs the question: If the prophesied losing side reads the book, won’t they just do something different to change the outcome? Duh.

Luke Wilson steps out of his comfort zone for this deep yet entertaining indie look at, uh, stuff. When his life is shattered by tragedy, he wraps himself in a cocoon of suburban isolation, but there are forces in the world that simply won’t allow his life to exist without hope.

John Cusack leads a great voice-cast in this animated misfire. He plays a clichéd mad scientist’s hunchbacked assistant who yearns to be something more. You’d think that with Eddie Izzard, Steve Buscemi, John Cleese, Sean Hayes and Molly Shannon, this would be a hoot, but somehow it just doesn’t work. Or maybe we’re full of crap. Can’t you people decide anything for yourselves?

A fun little no-budget indie Western about a quiet farmer who becomes a hero in 1880s Texas. We especially enjoyed seeing country crooners Roy Clark and Mel Tillis in small roles — and the incomparable Kinky Friedman as governor of Texas! (Counter-culture musician Friedman, of the Texas Jewboys, actually ran for governor in 2006.)

Damn fine inspirational racism/sports biodoc on Ernie Davis, the first black man ever to win the Heisman Trophy. Rob Brown stars as Davis, with Dennis Quaid as the standard hard-nosed coach with a heart of gold.

Bubbles, Blossom and Buttercup: Saving the world before bedtime. While creation credit usually goes to Craig McCracken, most of the PPG’s look comes from Genndy Tartakovsky, the same guy responsible for “Dexter’s Lab,” “Samurai Jack” and much of the new “Star Wars: Clone Wars” series. A six-disc set with all 78 episodes.

THE O.C.: THE COMPLETE FOURTH SEASON