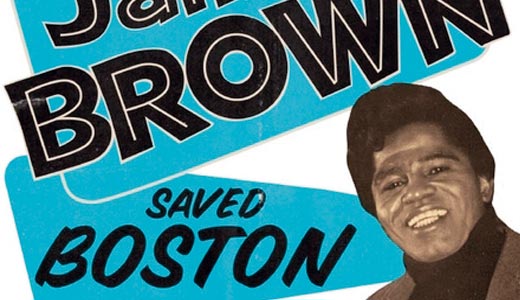 On April 4, 1968, Martin Luther King Jr. was assassinated in Memphis, and cities throughout America erupted in violence. In many places, the National Guard patrolled the streets while homes and businesses burned. James Brown was scheduled to perform the next day in Boston, one of the cities hardest hit. The mayor and the chief of police demanded that the concert be canceled, threatening a curfew, but Brown and a collection of King’s contemporaries convinced them that the performance could help heal the nation and put the country back on the path of non-violence that King walked. This is the story behind that evening told by the people involved, including band members, activists and members of the audience.

… And this is the actual concert that James Brown gave that night, probably the greatest performance of his career: no longer just a concert, but a call for peace and understanding across all races. At great personal expense, Brown and company agreed to broadcast the performance live, for free, on WGBH throughout the city, with a simulcast on AM radio. We, the authors, were in our early teens in ’68; watching this took us back to that night (and another some years later when fires burned outside our apartment on Preston Highway during forced-bussing riots). Things really are better now. Everyone should own a copy of this.

And who the heck is Charley Chase? Originally a comic actor at Mack Sennett’s Keystone Studios, he became one of the nation’s most popular actors, eventually replacing Harold Lloyd at Hal Roach Studios in the 1920s. A very comprehensive four-disc collection.

If all you know of Troma Studios is the Toxic Avenger, check out this 20th anniversary re-release of their wacky ’80s leprechaun fantasy. A nerd longs for the babalicious cheerleader, but she only has eyes (and other organs) for the football hunk. What to do? Why, find an inebriated 4-inch Irish wish-granter stuck in a beer bottle, of course! In its most famous scene, the nerd gets shrunk down to doll-size and winds up in the cheerleader’s panties — hanging on to her giant pubes while she shakes in orgasmic delight! In the middle of class! One helluvalotta upskirt fun from back in the day.

Nothing scares us more than cops, so this entry with Samuel L. Jackson as a bigoted, overwound, cop/pistol-packin’-neighbor-from-hell just about made us poop our drawers. Luckily, it’s so over the top, and the put-upon neighbors played by Patrick Wilson and Kerry Washington are so bland, we couldn’t take it seriously.

LISTEN UP!: THE LIVES OF QUINCY JONES

A collection of three docs on the man who is — in our humble opinion — the greatest musical talent of the 20th century. Don’t believe it? Then you don’t know Quincy Jones. Check this out and then tell us we’re wrong.

If you fondly remember “Planet Prince” or Infra-Man, then you may just love this craptacular Thai caped wonder. Completely incomprehensible dialog, zero-talent actors and hilariously bad costumes are all wrapped in SciFi Channel-ish CGI to transform a fireman into the supernatural … Mercury Man! Da dun da duuunnnn!

Tom Wilkinson is a long-time London gangster, tired of being pushed around by big-money foreign syndicates. Gerard Butler is a small-time hood trying to play both sides for profit. But you won’t believe who gets the cash in this, director Guy Ritchie’s best dramedy to date, featuring the always-appealing Thandie Newton.

Filmmaker Polanski was arrested in 1977 for a sex-and-drug-fueled afternoon with a 13-year-old Vogue model who could easily have passed for 21. Eleven months later he fled to Europe to avoid prosecution. This HBO doc focuses on that year, arguably America’s first media feeding frenzy, and how news reporting actually changed the meaning of the word “justice” in our time.

A wildly overambitious sci-fier about a dystopian future in which “DNA Hackers,” loan sharks and bio-terrorist gangs make life difficult enough without having to deal with … your family. Not perfect, but earnest as hell. We liked it.

This very adult drama about the personal cost of war has a rabid and vocal fanbase. Tim Robbins, Rachel McAdams and Michael Peña return from Iraq with baggage — both literal and figurative — in tow, and set out together on a journey to honor the past, bury it and start anew.

This had the potential to be another “School of Rock” but aimed for something simpler. Rainn Wilson of “The Office” is cut from his band on the verge of making it big. Flash-forward 20 years and he’s a sad, burned-out cubicle dweller. But when his nephew’s high school band needs a drummer, he steps in and carries them all on the ride of their lives. A nice bit o’ fun.

Woody Allen’s latest excuse to film Scarlett Johansson, as if anyone needed one. She and Rebecca Hall become enamored of the same artist, Javier Bardem, but neither is aware that his ex-wife, Penélope Cruz, is still very much in the picture. If it all sounds trite, then you haven’t factored in the amazing talents of Woody Allen. A truly wonderful, beautiful and lively look at life and love from a master.

OTHER DVDS OF INTEREST

THE GIRLS NEXT DOOR: SEASON FOUR