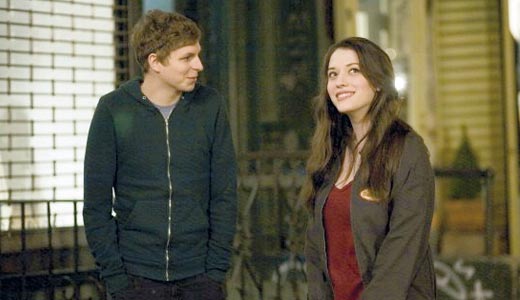 Gangly Michael Cera and lovely Kat Dennings are just plain precious in this modern, too-hip romantic comedy. They are strangers; he’s a loser bass guitar (almost-)player in a band, she’s just some girl in the crowd who needs an instant boyfriend to scare off some pesky guy. They have nothing in common, but as their various nighttime schemes collide, they discover a mutual love of music. Hilarious, arousing, clever and dumb all at the same time, it’s a winning youthful all-night adventure for the ages, and a perfect date flick.

If you liked “Sideways” or any of the other oenophilian (wine snob) movies of past years — or even if you didn’t — this historical look at how California wines became “respectable” during the 1976 tasting known as The Judgment of Paris is kinda fun. With Alan Rickman, Bill Pullman, Eliza Dushku and Dennis Farina.

We loved this silly/scary horror Western. A sheriff, his loser brother and a sexy little gun-shop owner take on undead zombie gunslinger Kane Hodder and his army of demons and peripatetic rotters to save the town — and rescue the sheriff’s hot new bride from a rapist from beyond the grave. Life doesn’t get any better than this.

This infamous trainwreck of a movie, where “On the Beach” meets “The Last Woman on Earth,” is a must-own for any student of film. Susan Douglas co-stars behind the massive ego of director/writer Arch Oboler, a radio legend in the ’40s whose “Lights Out” radio plays surely inspired Rod Serling. After a nuclear holocaust, the last five people on Earth, the only woman among them pregnant, fight a bloated, depressingly preachy script and zero visual direction for the survival of mankind. With some of the best historical bonus featurettes you could imagine.

The first three episodes of the Jason Voorhees saga are being re-released in uncut, deluxe and/or Blu-Ray this week, most with new bonus materials. Includes “Friday the 13th,” “Part 2” and “Part 3 3-D.” If you need to know more than that, you are truly not worthy.

HIS NAME WAS JASON: 30 YEARS OF FRIDAY THE 13TH

… And as part of the Friday The 13th party, we recommend this terrific doc on the how the series came to be and the effect it had on filmmaking. Hosted by master makeup mug Tom Savini (who loves to party in Louisville during WonderFest), it comprises 30 years of retrospectives, more than 100 cast and crew interviews, a survival guide, a look at the ’09 remake and tons more on two discs.

Shout! Factory’s second MST3K release includes the George Zucco werewolf flick, “Mad Monster,” “Manhunt in Space,” the immortal Joe Estevez in “Soultaker,” and “Final Justice” with Joe Don Baker. While the titles may not jump off the page, the first is a too-rarely-seen B&W howler from the ’40s; “Manhunt” replays a great “Rocky Jones Space Ranger” sequence; and the other two are perfect examples of how to make truly excremental cinema hilarious. Highly recommended, with lots of great bonus goodies.

We’re suckers for these Nova dino-features, which contain some of the best CGI since “Walking With Dinosaurs.” This one is a particular fave since it reconstructs the lesser-known but all the more intriguing monsters that populated the Earth’s polar regions.

A pair of little-known offerings from Mexican super-wrestler El Santo, Enmascarado de Plata. First he takes on she-werewolves in a latter-day outing from 1976. Then we have the superlative 1966 sequel to “The Strangler,” in which the titular evildoer rises from the grave, scarred and tooling on a pipe organ a la “The Phantom of the Opera,” to once again menace the world. This one is unique in that it features a record eight goofy musical numbers and the final screen appearance of Santo’s adopted son, Milton.

A fabulous quartet of Oscar winners on two discs from the Warner Bros. canon: the immortal “Casablanca,” “Gigi” with Leslie Caron, “An American in Paris” with Gene Kelly and “Mrs. Miniver.” First of an expected 27 such sets to be released in the coming year — without bonus material.

THE SECRET LIFE OF BEES

We were wondering what little Dakota Fanning was up to. She resurfaces in this great literary adaptation as a lonely 14-year-old orphan who finds a new family — and a link to her mom — in South Carolina with the Boatwright sisters and their mesmerizing bee farm. Can’t get anymore chick-flick than that, can you? With Queen Latifah, Jennifer Hudson and Alicia Keys.

U2 RATTLE AND HUM

Long-awaited Blu-Ray re-release of one of the best music DVDs we know. Filmed largely during the American leg of U2’s Joshua Tree tour, the venues range from massive stadiums to intimate beer joints, and includes several terrific pairings with B.B. King. Simply perfect, and highly recommended.