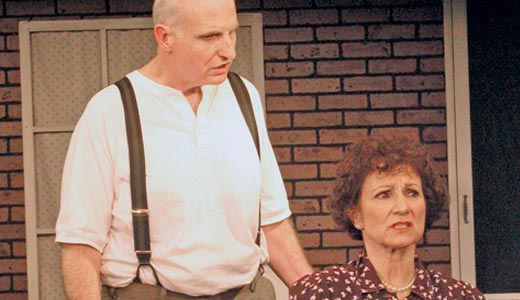 Nestled in a quaint corner of Pewee Valley, the cozy Little Colonel Playhouse feels far from the downtown Louisville arts scene. Their tradition of serving dinner on opening night is no mere marketing stunt, and homey touches — like volunteers serving punch during intermission — embody the spirit of community. So it would be easy to dismiss the Little Colonel Players as a sweet troupe of spunky amateurs, lauded for their heart if not their art, but appearances can be deceiving. Arthur Miller’s “All My Sons” is no lightweight show, and the stars of this production have the chops to pull it off.

The inclusive nature of community theater often results in a cast not evenly matched in talent and experience, and this one is no exception. But director David Goodlett picked power performers to play the Keller family: father Joe (Brad Castleberry), mother Kate (Grace Poganski) and son Chris (Jonathan Adams). In the years following World War II, the Kellers live the American dream under the shadow of several ghosts and secrets, and Chris tries to move beyond his family’s past in order to secure his own future. His brother Larry, a fighter pilot missing in action for more than three years, is presumed dead by all but Kate, who clings to her last shred of hope for reasons she won’t reveal. And then there’s Joe’s crime of shipping faulty airplane cylinder heads and his exoneration, while his business partner still serves time for a blunder that cost pilots their lives. When Ann (Maggie Hartman), daughter of the jailed partner and Larry’s old girlfriend, comes for a visit, the Keller family’s delicate veneer begins to crack wide open.

Lauded for bravery under fire, Chris finds himself in a peacetime world that doesn’t value the principles of honor and selflessness he learned to love in battle. Floundering without a sense of purpose, he turns to Annie, who moved away after her father’s conviction and Larry’s disappearance. Adams shows remarkable range and restraint in this role, turning Chris slowly from a determined optimist to a man facing many bitter facts about his family and worldview. His most emotionally charged scenes are shared with Castleberry, who moves deftly between weary good humor and desperate anger as father and son face off in the battle of idealism versus practicality. Also waging that war internally is the knowing Dr. Jim (a delightful Rich Williams) next door, caught between dreams of a research career and the stability of general practice.

Chris and Annie can’t marry without Kate’s blessing, but Kate would prefer Annie wait forever for Larry, as she herself is prepared to do. Poganski’s most powerful moments are her quiet ones, as she attempts to smooth the covers over her family’s past, determined to ignore or chase away any evidence or act that disrupts her delicate balance of mourning and denial. When Chris and Annie start chipping away at Kate’s resolve, her fear turns her hysterical, and all the family secrets eventually come to light.