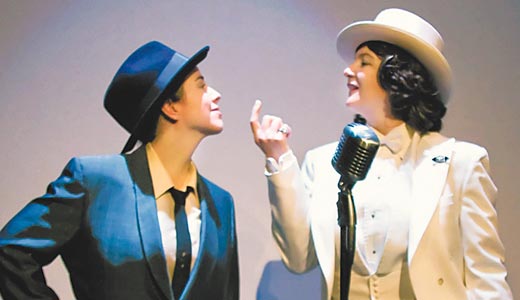 (Pandora Productions presents “Pulp,” with book and lyrics by Patricia Kane and music by Andre Pluess and Amy Warren. Directed by Michael J. Drury. Continues through Jan. 18 in the Henry Clay Building. For tickets, call 216-5502 or visit www.pandoraprods.org.)

Delivered in the clipped, exaggerated cadence of film noir, complete with dramatic lighting and music, Kane’s dialogue is peppered with sassy innuendo, as racy as the books it honors but tempered by a playful sense of titillation and seduction.

These hardboiled dames and mouthy sidekicks find shelter and each other in The Well, where Chicago’s women who love women gather to drink, flirt and perform drag cabaret under the watchful eye of the benevolent Miss Vivian (Raven J. Railey) — bar owner, heiress and international woman of mystery. Cute and feisty bartender Pepper (Laura Ellis) hooks Terry up with a waitress job and the spare room upstairs, but Bing easily captures Terry’s attention. Their chemistry is undeniable — Cooke is all legs and lips and arched painted eyebrows, a satin and velvet seduction to Crocker’s denim-and-khaki bravado and charm.

Terry and Bing become lovers, but when Miss Vivian returns from France, Terry grows intrigued by the heat bubbling just under Vivian’s cool surface, sparking a triangle of sorts built on secret pasts and desires. Vivian’s rules for her establishment, including “no girls upstairs,” are designed to keep The Well safe from police raids and the outside world, but her own strict code of decorum also serves to keep others at arm’s length. Railey channels every black-and-white-movie heroine with her classic combination of steely reserve and extreme vulnerability, and her scenes with Crocker crackle with sexual and intellectual tension.

Terry and Vivian might be the main attraction, but it’s sweet, Barbara Stanwyck-quoting Pepper’s longing for champion skeet shooter Winny (Kate Holland) that reveals the heart of The Well beating beneath all the bed-hopping and dirty talk. Caught between the constrictions of the straight world and the freedom she feels as The Well’s most talented and charismatic drag king performer, dowdy Winny remains cheerfully and deliberately oblivious to Pepper’s attentions and to her own heart. Holland’s quiet grace breaks the vampy spell of the oversized production at several points, and her moving performance of a woman on the verge of finding her true self shows the real substance under the script’s style and flash. “Pulp” isn’t just about sex; it’s about freedom and what you do with yourself once you find it.