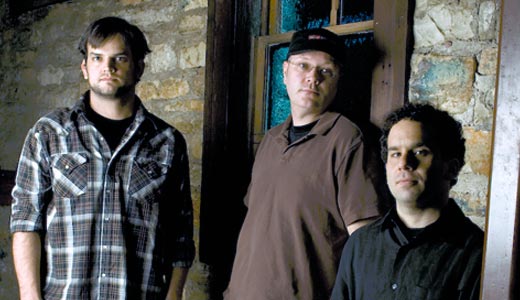 Merging jam-band work aesthetics with electronica makes for one risky proposition. For even the most open-minded audience, there’s a fine line between top-notch trance and trance-induced coma. But if your muse points you toward that kind of music, maybe you can avoid the pitfalls, get people hopping on dance floors and outdoor-fest fields, even battle The Sea & Cake for a Chicago Music Award (for best CD).

Such is the rewarding fate of Future Rock. As demonstrated on 2007’s Gears, this group loves layers of beats and loops with ear-catching momentum, but then throws some unexpected tactics in to cap off the track. They’re not tearing their own sound down — you can hear that they’re subtle in their mutual obsession with keeping the party fresh.

The band’s looking forward to a live release in the next few months, and there’s almost enough material for their next studio full-length. The Headliners gig marks the Chicagoans’ first appearance in town. Enter Future Rock keyboardist Mickey Kellerman.

LEO: How did the band first come together?
Mickey Kellerman: Felix (Moreno, Future Rock’s bassist) and I met in college at Northwestern University and played together in a different band. At the point that our first band reached its natural conclusion, we both independently developed a conceptual idea for a new band. When we realized that our ideas were completely identical, it was clear that we needed to start Future Rock. Both of us grew up in the ’90s listening to grunge bands like Nirvana and Pearl Jam, and we wanted to fuse that hard rock attitude with the electronic dance style we fell in love with while we were in college.

LEO: Do you add new samples for your existing songs, or do the changes from one show to another come from improvisation? Are you always looking for samples … that is, checking for found sounds with rhythmic potential?
MK: We don’t look for samples and found sounds as much as we create our own samples and sounds. Darren (Heitz, drummer) is able to sample himself on the fly and incorporate that into improvised sections we are playing.

I actually just recently created about 100 different drum sounds using my MiniMoog Voyager and sent them to Darren to load onto his sample pads. We are constantly trying to add new sounds to our live show, whether they are for a composed section of a song or for use when we are improvising, and there is something really cool and satisfying about creating those sounds ourselves.