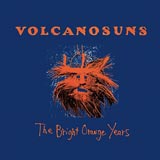 Volcano Suns was started by Peter Prescott, drummer for (late, great and now reformed) Mission of Burma. Apparently he wanted to continue making the rock music but didn’t want to take it too seriously. I imagine him and his cohorts pounding these tunes out in the garage, after a couple 12-packs of whatever local swill they pound out there in Beantown.

The Bright Orange Years starts with a bouncy bass line that seems to continue straight through the 20-some-odd tracks. It’s upbeat enough, but it sorta comes across as dumbed-down party-Burma. The party atmosphere is brought home by ending the album with a badly recorded, uninteresting cover of Prince’s “1999.” I guess I had to be there.

All Night Lotus Party tries to fool you, opening with a blast of feedback and distorted guitar. But by the 24-second mark, they’re right back to bouncing along with those bass lines. This record takes a few more chances than The Bright Orange Years, which could be attributed to Prescott not being the main songwriter this time around. Regardless, the party continues.

According to Merge, these two albums have never been released on CD, so they may be unfamiliar to (non-complete-music-geek-asshole) modern audiences and worth a listen, if you’ve ever heard that one Mission of Burma song about revolvers and thought it was totally cool, man.