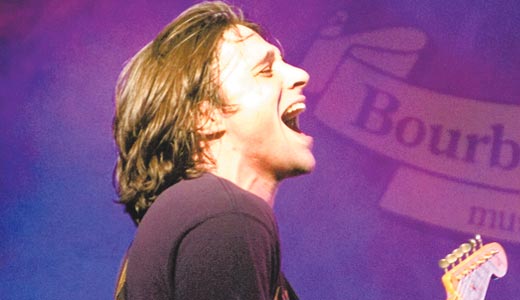 Josh Garrett & The Bottom Line perform Wednesday night at Stevie Ray's. Garrett, a Houma, La., native, has just relocated to Nashville, where the band has a residency.photo by galaxie agency

Less than a week into a residency at Bourbon Street Blues & Boogie Bar in Nashville’s Historic Printers Alley, Josh Garrett says he and backing band the Bottom Line are acclimating to a new set of geographical — and professional — surroundings.

“We’ve got Louisiana in our blood,” says Garrett, who, like the rest of the group, hails from Houma, La., a haven for the traditional Cajun and Zydeco that creeps subtly (and not-so-subtly) into the Bottom Line’s blues oeuvre.

“As you leave Louisiana, you don’t find Zydeco or Cajun too many other places,” he says. “Our music is based around that Louisiana sound.”

Garrett’s solos, like most of the Bottom Line’s show, are all improv, to keep the blues from going stale on stage. He’s landed tours with Tab Benoit, Sonny Landreth, Anthony Gomes and Mike Zito.

He basically had to reboot his career, though, after serving 12 months as a staff sergeant in the 10th Mountain Division in Iraq. Much of his new album, Changed Man, was written over there on a crappy — his words — acoustic. Twelve months in a war zone does wonders for the muse.

“Those intense emotions and intense situations make it easier to write,” he says.
Changed Man isn’t Garrett’s Born in the U.S.A. “It’s not a political album. It’s a personal album, my personal feelings. I don’t wanna push too much of my politics into music, and I think when you listen to it, you can really pick up on that.”

Garrett’s decision to go full-time included a change in his lineup.

Where New Orleans is a city of varied musical styles — from funk to rap to blues — Garrett says his hometown Houma is Cajun territory. Before the band decided to move to Nashville, Garrett added a horn section.

“I started to embrace my culture more than I did before or what I may have taken for granted before,” he says.

He’s not the only one embracing it: This year, for the first time, the Grammys added a category for best Zydeco album.