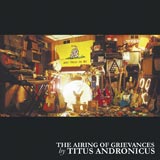 From the moment that “Fear and Loathing in Mahwah, NJ” mutates from lo-fi murk to a pounding, wall-of-noise sea chantey, Titus Andronicus make their intentions clear. Their debut The Airing of Grievances is an incorrigible mess of contradictions, in which Colin Meloy-styled English-major references clash violently with an atmosphere of sweat-drenched clubs and red-cup revelry. They come on like beer-soaked brawlers, but their Shakespearean moniker, along with song titles like “Albert Camus” and “Upon Viewing Bruegel’s Landscape with the Fall of Icarus,” indicate that little about the band is to be taken at face value. Their sound is downright exhausting — the album rarely relents from the barreling tempo laid out in the opening track, and the vocals seem to continually redline throughout. Such an uncompromising attack naturally leads to some sameness among the individual tracks, but the album does find a standout in “Arms Against Atrophy,” which slows the tempo (slightly) and ups the melodic quotient without sacrificing any of the group’s copious volume. The Airing of Grievances has all the in-your-face intensity of a packed club show, and — more often than not — sounds like it was recorded at one.