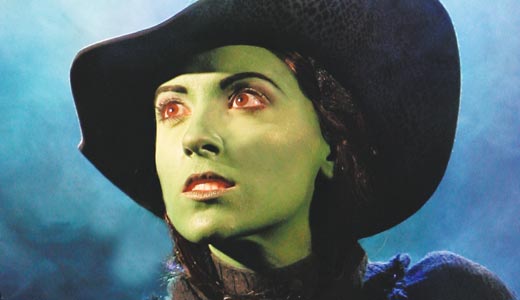 Get ‘Wicked’ with it

Yes, “Wicked” is here. And if you don’t know the story, it’s about the Wicked Witch of the West … before Dorothy dropped in. The musical, based on Gregory Maguire’s book “Wicked: The Life and Times of the Wicked Witch of the West,” debuted on Broadway in 2003, and ever since, apparently Louisville has been holding its collective breath waiting for it to fly into town. (Ironically, I guess, tickets are still available.)

As a side note, on Monday, Jan. 12, the cast of “Wicked” will put on a benefit cabaret titled “Defying Inequality” at The Connection (120 S. Floyd St., 585-5752; $20, 8 p.m.). Proceeds will go to charitable organizations working to protect the civil rights of the LGBT community. —Sara Havens

Louisville Orchestra conductor Bob Bernhardt is no slouch. He’ll be on his feet all weekend, waving his hands through the air, leading the Orchestra far, far away from classics like Bach or Beethoven. This weekend’s agenda: A Tribute to Oscar and ABBAmania.

Part of the Chase Pops series, Friday’s show finds the Orchestra alongside Toronto tribute band ABBAmania for a Spandex-and-bell-bottom trip through the ’70s, featuring covers of the greatest hits from the Swedish pop group. This may be the closest any ABBA fan can get to experiencing the group live — ABBA members Bjorn Ulvaeus and Benny Andersson made it clear recently that the group would never get back together. Ever.

And on Thursday and Saturday, as part of the NightLights series, the Orchestra, along with soprano Angelique Clay, will cover music from Oscar-winning classics like “Titanic,” “The Lord of the Rings,” “The Wizard of Oz” and “Pinocchio.” —Sara Havens

•‘A Tribute to Oscar’

Originally founded on competition, The Reed Island Rounders have surpassed playing at fiddlers’ conventions. Since 1993, The Rounders have earned international acclaim performing at the Friends of Appalachian Old Time Music & Dance Festival in Gainsborough, England, and appearing at prestigious folk festivals in Chicago, New Jersey and West Virginia.

All that, and there’s a six-album catalog, faithful to old time, balladry and swagger coexisting peacefully, or, when the environs permit, not so peacefully. The show doubles as a homecoming for co-founder Billy Cornette, who lived in Westport briefly. Dozens of Dollars Band opens. —Mat Herron

The road couldn’t get any tougher for Turley Richards. A childhood accident rendered one eye useless. A trip west to Los Angeles with two close musicians purportedly bent on “making it” ends with them quitting and him stranded in the Valley of the Dolls.

It gets worse. The absurd trek to New York in the mid-1960s. His whopping $87 lasted a nanosecond, so he tried to sell blood for money, ended up sleeping in Central Park. He played the clubs, and the ladies, too. One woman happened to know Norman Schwartz, who repped jazz-head Stan Getz, among others.

Richards signs a record deal with MGM/Verve, one of nine he would be signed to over his career. You can look at that as a blessing or a curse, but when you can barely eat, it doesn’t matter. Plaudits from Billboard, etc., the critics dig it.

The voice starts to go. Management makes bad decisions. The spotlight turns away. His voice returns. He realizes it’s a gift he needs to share. So he becomes a vocal coach.

For Richards, life is about the climb.

“There was a girl who wrote a great song back in the ’60s, which I recorded, called ‘It’s an Uphill Climb to the Bottom,’” he says on his website. “Sometimes I feel that no matter how much I climb, I feel like I’ve been pushed back to the bottom rung of a stepladder. I know that I have been given a gift.” —Mat Herron

‘Our History in the Time of Milk’

So while Harvey Milk was fighting for equal rights in 1970s San Francisco, did you ever wonder what the climate was for the LGBT community here in Louisville? I can’t imagine it was any smoother or less complicated than the challenges Milk faced while becoming the first openly gay elected official in the country. The Fairness Campaign and U of L’s Office for LGBT Services are hosting a lecture Tuesday night featuring gays and lesbians who lived here during that time who will share their experiences, struggles and thoughts on how far we’ve come and how far we still need to go. If you were around these parts in the ’70s and have lucid memories to prove it, you’re encouraged to offer up your own insights. —Sara Havens

This is the month to read a real doorstop of a book, right? It’s a chilly season for both weather and finances, so the timing couldn’t be better for the uber-opus that is the long-awaited biography of Warren Buffett. The richest man in America has his paradoxes and peculiarities: both shoplifting and saving as a youth. Chasing skirts — not of supermodels but natural nurturers. Buying Dairy Queen but avoiding the high-flyers of tech booms. When Buffett offered full cooperation to hesitantly aspiring biographer (and financial guru in her own right) Alice Schroeder, she couldn’t help but let the narrative drift along with what she captured in 300 hours of personal interviews and full access to Buffett’s atypical family. The book’s entitled “The Snowball” (a metaphor for accumulating things of value as you go through life), and most reviewers believe the engaging story and wisdom herein justify the dead trees. This reading/signing is at the Main Library — which, as usual, keeps the event free but asks that you call or log on for the required tickets. —T.E. Lyons

‘Varied Nature of Beauty and Art’

Sallie Clay Lanham is a Kentuckian through and through. Her important Kentucky relatives include Cassius Marcellus Clay, a Kentucky State Representative and Ambassador to Russia during the Abraham Lincoln presidency, and women’s rights advocate/suffragist Laura Clay.

She is continuing her family’s honored tradition of personal excellence as an award-winning painter. She specializes in landscapes, still-lifes and portraits in oil and watercolor, and she designed the “Buckle Up Kentucky” logo.

Last year was a good one for Lanham. She was named the official artist of the governor and first lady’s Easter Egg Roll, was the Frankfort Area Chamber of Commerce’s Artist of the Year and was an Artist-in-Residence with the Kentucky Arts Council.

Gallery at the Brown Hotel

Mixed media artist/sculptor Shawn Marshall is a member of both the PYRO cooperative gallery and the ENID sculpture organization. She is the common link for the current group exhibition displayed at the gallery.

Her interest in sculpture has led her to work on transforming the two-dimensional canvas — in other words, painting — into three dimensions. The women sculptors of ENID further illustrate the almost unlimited possibilities of sculpture. Their opening reception is Friday, Jan. 9, from 5-9 p.m.

Work by all of the PYRO artists is being shown during “Match Games” in the gallery at Actors Theatre of Louisville. “PYRO at Five” is a group exhibition celebrating the gallery’s fifth anniversary (it closes Jan. 25). —Jo Anne Triplett