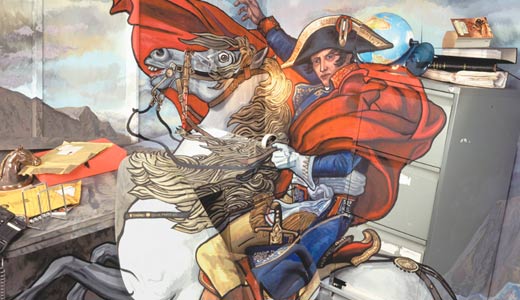 To save you from donating plasma or pawning your prized Gibson, some of Louisville’s arts representatives came together last Tuesday to announce a new ArtsRush day-of-show ticket program they’re enacting through the remainder of the 2009 season. Included in the mix are Actors Theatre of Louisville, Stage One, Louisville Ballet, The Louisville Orchestra, PNC Broadway Across America and Kentucky Opera.

Here’s how it works: Two hours before curtain call of a particular show, head to the venue’s box office and pick up tickets for a mere $10. Rush tickets will be on a first come, first served basis, and the number of tickets will vary. You also have to do this the old-fashioned way — in person.

“This is a way for us to give back, something especially important in light of the current economic crisis,” said Stephen Klein, president of The Kentucky Center. “Patrons will now have the opportunity to see award-winning, live performances for the price of a movie ticket.”

Check out the details and full schedule of events at www.kentuckycenter.org/artsrush. —Sara Havens

The time between an impulsive New Year’s Eve kiss and the St. Valentine’s Day Massacre can be a romantic minefield, and that’s an understatement if even one of you is psychic. Actors Theatre of Louisville explores the ripping highs and crushing lows of dating and partnership with “Match Games,” a series of 10-minute plays directed by Michael Bigelow Dixon. The sequence showcases some of the best of the diminutive genre, with classics like “Sure Thing” — which taught an entire generation of acting students how to pronounce Django Reinhardt — and “Controlling Interest,” in which the boys broker a power accord with the girls, realizing too late they’ve drawn the short end of the straw.

Though overwhelmingly heterosexual, “Match Games” does run a stylistic gamut, from “The Blue Room” and its dreamlike love triangle between a man, a woman and the sea to the biting love-and-marriage satires “Mr. and Mrs.” and “The Processional.” It’s breezy enough for a casual date with enough emotional weight to satisfy the smug marrieds. Five versatile and talented actors flex their muscles in a wide range of roles, but the apprentices in charge of set changes work their own silent romantic intrigues, nearly stealing the show. —Erin Keane

If 28 years in the Clark County Public Schools system has taught Patty Simmonds anything, it’s that imagination rules.

Bored with the podium-and-lecture style and low parental attendance at Wilson Elementary’s Kindergarten Math Nights, Simmonds put her other skills — as entertainer and producer for Jeffersonville’s RiverStage and Theater A La Carte of 300 Spring Street — to good use.

Her musical “The 1950s” features 100 kindergarten students (from W.E. Wilson Elementary) and their moms and dads, who will perform “Rock Around The Clock,” Neil Sedaka’s “Calendar Girl” and other hits from the era. Clark County superintendent Travis Haire will appear as Elvis.

“The kids have been working on Saturdays and giving up their recess to work on this,” Simmonds says. —Mat Herron

Did you know mountaintop removal mining is on pace to destroy 600 square miles of land and thousands of miles of rivers and streams over the next decade? And did you know much of that devastation is occurring right here in the commonwealth?

The controversial coal mining process involves using a volatile mixture of explosives to blast off the tops of mountains, resulting in debris raining down on the hollers below. While the practice has decimated much of Eastern Kentucky’s mountaintops, advocates say it’s necessary to keep the coal industry afloat.

To shed light on this practice of turning peaks into plateaus, the St. Xavier High School Environmental Club is hosting a panel discussion on the topic. The forum is free and open to the public, so you have no excuse not to go back to school and educate yourself. Speakers at the event will include Louisville environmental lawyer Tom Fitzgerald, two members of Kentuckians for the Commonwealth, two members of the Kentucky Coal Association and LEO Weekly’s very own Stephen George. —Sarah Kelley

‘Strings in the Aether’ by Brian Harper

Brian Harper is the newest faculty member at Indiana University Southeast. That honor entitles him to a solo exhibition by way of introduction.

Harper specializes in ceramics, and his exhibit installation piece consists of a long pedestal suspended over the gallery floor.

“This work explores the human need to build individual and private mythological constructs out of seemingly incomprehensible concepts,” Harper explains. “For example, the collective capacity of the human mind to look to the infinitely small, the infinitely large and the psychological infiniteness is becoming more and more mechanized. From particle accelerators to the data mining systems of genome mapping operations, the collection and processing of increasingly enormous amounts of information has required the use of increasingly complex systems to bridge the gap between data and comprehension. I’m investigating the probability of new forms of personal mythological structures existing within this gap.”

The show’s opening is Thursday from 5-7 p.m. Harper will discuss his art at 6 p.m. —Jo Anne Triplett

Harlow’s (formerly Tailgaters) is positioning itself as a destination for hip-hop showcases, the type burgeoning rappers use to display their skills in freestyle and beyond. Deuce Leader throws his on Mondays, King of the Ville’s competitions are on Tuesdays and B-Boy’s break-dancing battles take up Wednesdays.

Nic Brutal, who along with Trey LeParc form the rap duo/production team, says Camp Pain’s got another mixtape due out next month from the group No Sleep called It’s a Bet, and are four songs into M.O.B. Up’s untitled debut.

“It’s not industry beats,” says Brutal, adding that Camp doesn’t sample, and describes their production style as a stew of reality rap, hip-hop and experimental. “We mostly stuck to Louisville on the first one, but now we’re branching out to E-town, Lexington and Bowling Green.” —Mat Herron

Bad news: Showtime’s groundbreaking lesbian drama “The L Word” is ending this year, after its sixth season. Good news: There’s a spin-off in the works with the character Alice. Better news: The dreadful Jenny character is murdered in the first two minutes of the season premiere on Sunday, and Louisville ladies are encouraged to watch in unison at an event coordinated by the Fairness Campaign and Fleur de Lez, a new website created to bring together the local lesbian community.

Sunday’s free party at the Monkey Wrench is also a launch of Fleur de Lez’s “Ladies of Louisville” calendar, which features local lesbians and their supporters. Included among the faces are professionals, athletes, artists and even a member of LEO’s editorial staff, who pens the blog Closet Space on the site. I’ll give you a hint: She writes about drinking, Dundee Dip, the Back Door and Debbie Gibson. —Sara Havens

If you’re headed to D.C. for Barack Obama’s inauguration on Tuesday, more power to you. I was warned a few months ago, by our very own Congressman John Yarmuth, to steer clear of the event. It’s going to be packed … you probably won’t be able to see a thing, he said. I heeded his advice and decided I’d visit the capital city another time. But I still want to commemorate the moment. Luckily for us stuck here in Louisville, the Center for Interfaith Relations and eight other organizations are hosting “We the People: From Hope to Change: A Community-Wide Inauguration Celebration” Tuesday evening at First Unitarian Church.

I’m part Scottish, so of course I’m excited about anything exhibiting the art of 15 contemporary Scots. Featured in “The Scottish Show” are Steven Campbell and Ken Currie, labeled the “New Glasgow Boys” (the old “Glasgow Boys” and “Glasgow Girls” worked in the 1880s and 1890s). They’re part of a group of figurative painters who studied at the Glasgow (Scotland) School of Art and gained prominence in the 1980s.