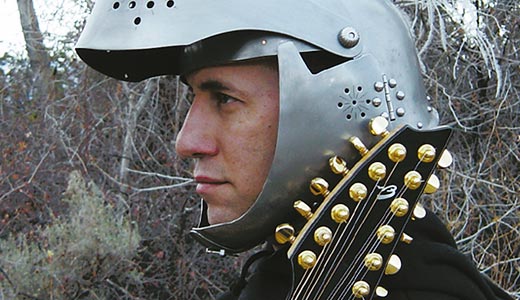 Louis CK makes his second visit to Louisville within a year, performing at Improv at Fourth Street Live. Since his last visit, he’s taped a new HBO special, co-starred in three major motion pictures, gone through a divorce, shot a pilot for his second television series, and performed multiple shows to packed theaters and festivals nationwide, including Bonnaroo. All this is fodder for another stellar Louis CK performance. “Once people trust your ability to perform, you can say almost anything,” he told us last January. He is known for discussing just about everything, challenging his audiences with intelligence and biting wit. —Jason Sitzes

Hear ye, hear ye, a new theater company hath arriveth here, but ’tis not one of modern nor recent disposition. This new group, called Savage Rose, specializes in classical theater, opening this week with a debut production of John Ford’s “’Tis Pity She’s a Whore,” directed by J. Barrett Cooper. Similar to “Romeo and Juliet” but with a twist, “’Tis Pity She’s a Whore” is a play featuring forbidden young love, vengeance, greed, lust and a tragic ending.

Savage Rose’s repertoire will consist of everything from Shakespeare, Elizabethan and Jacobean plays (their focus) to the Greeks, all the way up to modern classics and everything in between. They wants to kick it old school in the theater world, but at the same time show how classical theater can still be relevant to a contemporary audience. Don’t let the word “classical” scare you — Savage Rose aims to present this material in comprehensible manner, and while the language and costumes might be a bit dated, the subject matter is hardly different from what we “contemporaries” are familiar with. We know and love sex and violence, do we not? Aye. —Jane Mattingly

Unique voices, unexpected dialogues, poetry and prose. Carmichael’s is hosting an evening triptych of readings by a diverse lineup of talents. Karen McElmurray brings “The Motel of the Stars,” her sly look at a family’s encounters with peculiarly American institutions of metaphysical faith. It was recently published by Sarabande as the latest selection in the Linda Bruckheimer Series in Kentucky Literature. Sean Hill’s fictional family in “Blood Ties & Brown Liquor” inhabits poems instead of a novel. The book’s time frame includes their rise from slavery in Georgia — but plenty of pitfalls show up down the road. Elizabeth Bradfield, currently the Wallace Stegner fellow in poetry at Stanford University, will read from “Interpretive Work.” Her volume of poetry blazes a twisty trail where close observation of nature and relationships serves to hone the lens by which we view our identities. —T.E. Lyons

The music of six- and 12-string finger-style guitarist and composer Richard Gilewitz has wowed thousands over the last two decades, but rather than keep his methods close to the vest, Gilewitz turned his craft into a multifaceted instructional tool. Instructional DVDs and workshops unveil a technique good enough to be a closely guarded secret.

Fans of classical, rock, blues and Americana will find all those qualities manifested in a pair of hands that should have an insurance policy.

Gilewitz’s weekend two-fer includes a free concert Friday and a four-and-a-half-hour workshop Saturday. You can sign up for individual sessions or the whole block, and the sessions, while geared to all skill levels, require some knowledge of chord recognition and tablature. —Mat Herron

One reason is demand. “It comes down to an audience that is knowledgeable about different types of music rather than what they hear on the radio,” he says.

Friday night, he and the rest of Coco Yam Band, formerly Ohun Afrobeat Band, take their chops from the stages of World Fest, the Reggae Festival at the Water Tower and the International Festival in New Albany and retrofit them to the recently remodeled Vernon Lanes Club on Story Avenue.

Coco’s background is as diverse as its music: Keyboardist and singer Hussam Al Aydi is from Qatar and plays Middle Eastern style in the group Baladna (“our country” in Arabic). Percussion and tenor sax player Yahya Johnson lived and studied music in West Africa; Gregory Acker, an ethnomusicologist, teaches world music at IUS; and guitarist Kaohimaunu is Hawaiian. Together, Coco Yam melds Afrobeat, traditional highlife and reggae. Defy your niche and check it out. —Mat Herron

Forget Serena and Blair and their Upper East Side designer headband fantasy lives. When you were in high school, were you an Angela or a Rayanne? A Brian Krakow or a Jordan Catalano? These references will become relevant to, like, a whole new generation thanks to Walden Theatre’s production of “My So-Called So-Called Life,” the story of a 15-year-old girl who believes she’s a character in one of the most true-to-life teen dramas ever made.

An antidote to the middle aged so-called teenagers in “90210,” “My So-Called Life” hit so close to home it was painful to watch, which is to say I wanted the ground to crack open and, like, suck me in, which is probably why it only lasted a season. Some shows are better in reruns, and as nostalgia for the ’90s and the infinite whatever of existential teenage angst, it can’t be beat. Eight Walden Theatre students play the horrifying roles of actual teenagers under the direction of Alec Volz, who plays the real role of the clueless adult who totally doesn’t get it, GAH. Flannel shirts and Doc Martens are optional, but don’t forget your Buffalo Tom CD for the drive downtown. —Erin Keane

A trio of players from the Chicago Symphony appears Sunday in the continuing Chamber Music Society series in Comstock Hall at the U of L Music School. Concertmaster Robert Chen, principal cellist John Sharp and pianist Jorge Federico Osario perform trios by Beethoven and Schubert, plus a violin and cello duet by 20th-century Hungarian composer Zoltan Kodaly. Always interesting is the pre-concert talk at 2 p.m. in adjoining Bird Hall. —Bill Doolittle

Comstock Hall, U of L School of Music

Wal-Mart, Target and Kmart do their best to individualize their brands, but the superstores have at least one thing in common. Actually, a really big thing: the building. How can these “big boxes” be recycled when a business abandons them?

That’s the question Julia Christensen answers in her book and photography show, “Big Box Reuse.” Traveling more than 75,000 miles since 2004, Christensen photographed examples of these warehouse buildings that have been changed into such entities as churches, schools and senior centers. My favorite has to be the Spam Museum — adaptive reuse indeed!

A cautionary note: The National Trust for Historic Preservation published a study in October 2008 that stated “the energy used to destroy older buildings in addition to the energy used to build new ones could power the entire state of California for 10 years.” —Jo Anne Triplett

‘Infinite Riches in a Little Room’

The Louisville Visual Art Association recently threw itself a 100th birthday party. The festivities included the opening of the exhibition “Infinite Riches in a Little Room,” featuring work by 30 Louisville-area artists.

LVAA’s lecture series, “Food for Thought,” introduces artists to attendees who lunch. The show has one work from each former “Food for Thought” presenter, including Jacque Parsley, Sarah Frederick and Keith Auerbach.

Another of the artists featured in the exhibition is Billy Hertz. LVAA’s first award presented to outstanding artists/entrepreneurs was given to Hertz and Tom Schnepf of Galerie Hertz. Instrumental in developing East Market Street as an arts district, their decades-long biz is an inspiration to others in the visual arts. Their recent move to Preston Street has signaled a new area that’s ripe for art development. —Jo Anne Triplett