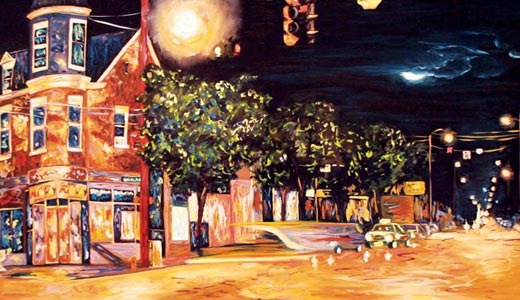 Countrypolitan has many names and metaphors, and The Payton Brothers sound like they’re comfortable will all of them, thanks. The Bloomington group (a veritable invasion this weekend; see: The Delicious staffpick) has planted its feet in a post-country world thanks to shared bills with Cross Canadian Ragweed, Big Smith and Leon Russell.

Small wonder, that: Jason Payton’s time in the bluegrass group Wildwood was a considerable factor in brother Ryan’s decision to join him. Once in the same zip code, the pair spent three years honing their message with a slew of basement recordings. Now they’re back in the area for good, with a new, self-titled album for sale. —Mat Herron

Someone recently asked me if I had seen any good movies lately. My answer, of course, was no, not necessarily because there aren’t any out, but mainly because I haven’t had the motivation to shell out nearly $20 for two tickets and wade through the gangs of squawking Edward Cullen enthusiasts, unsure if the movie will even be worth the effort or if I’ll just end up making out like everyone else. But here’s a new idea: The Derby City Film Festival is kicking off their Internet radio show, “Derby City Film Chat,” and a free monthly film series that begins Friday.

“We accepted 19 films from local and regional filmmakers at least year’s festival, but there were so many more entries that we didn’t accept, and we wanted a way to showcase those films as well,” explains DCFF co-founder Kristofer Rommel. The series will showcase films connected to Louisville or the region, with this month’s films being “Finale I” and “Finale II” by local actors and founders of True Dreams Productions William Cothron and James Hardin. Kris and Ashley Rommel of DCFF hope that this series will unite local filmmakers and showcase their work to more moviegoers, who can also discuss the films with them. As for the film chat, it airs every Tuesday at 11 p.m. on blogtalkradio.com. Did I mention it’s free? —Jane Mattingly

I had a Mardi Gras hookup this year. A friend who works for a liquor company invited me to crash at her hotel, on Bourbon Street, with a balcony. Unfortunately, I just don’t have the funds to scrape up even for a car rental. Yes, this recession sucks, but it’s not going to stop me from celebrating. On Friday, the Historic Frankfort Avenue hosts a Mardi Gras-themed F.A.T. Friday Trolley Hop (6-10:30 p.m.), which also includes the Mardi Gras Ball at the Mellwood Arts Center. The party features Reva Deveraux as MC, Cajun music by Crushed Velvet, a best mask contest and door prizes, including a trip for two to New Orleans. Oh, and beads. Lots of beads. It is still undetermined whether you’ll have to get them the old fashioned way, or just by asking politely. Admission is $3, with a portion of the proceeds benefiting the United Crescent Hill Ministries. —Sara Havens

Do you root for the Arizona Cardinals because their mascot is a lot like ours, or do you side with the Pittsburgh Steelers because they’re closer to us in proximity and the better team? You will root for the Steelers, of course! And what better place to wear your black-and-yellow and cheer on Ben and the boys than R Place Pub, Louisville’s official Pittsburgh Steelers Fan Club bar.

If you’ve never been, here are a few rules: Don’t root for the other team — I’d even advise not to wear red. Don’t expect a seat — the true fanatics get there at 10 a.m. and tailgate in the parking lot. Don’t argue with the regulars or the staff. Tip well. Scream as loud as you want, wear silly masks and run topless around the bar every time Pittsburgh scores. Specials include $1.50 domestic bottles, $4.50 pitchers and 35-cent wings. —Sara Havens

Humor is often a poorly used tool in rock, so when Bloomington, Ind., ensemble The Delicious serenade you with one-liners like, If you grant me the opportunity/I’ll gyrate rhythmically in your vicinity, or Hey, high fructose corn syrup/you’re in everything I eat, half of you wants to write them off as kitschy pervs, and the other half digs the lowbrow whimsy.

Whimsy, to hear member David Woodruff tell it, is hard work when mixed with vivid depictions of the ills of social anxiety and, paradoxically, wind-at-your-back protestations of optimism. “I had a very specific sound in mind,” he says. “I wanted it to be positive, kind of quirky and dissonant.” See for yourself. IamIs joins the bill. —Mat Herron

One tends to think of Christianity and sexuality as mutually exclusive, and with good reason: After all, several prominent Christian denominations have led charges against gay marriage, proper sex education, gender equality and sex that does not result in procreation. Christianity also tends to be male-centric and patriarchal when it comes to sexual relationships. Joyce Oglesby, a minister’s wife and relationship writer, has devoted her light touch and latest book, “Turning Her On and Keeping Her Heart,” to husbands trying — and presumably failing — to get their wives off. Oglesby, author of “Keeping His Pants On,” a guide for women who suspect their husbands are considering philandering, tries to step aside all that religious hoo-ha when it comes to sexuality — but she always stays within the context of marriage. Should be a stimulating chat, at the very least. —Stephen George

A young nation loves a bicentennial, and we’re going all out for Lincoln’s 200th birthday, affirming Kentucky’s bottomless appetite for celebration. The University of Louisville’s African American Theatre Program gets in on the action with the debut production of Carlyle Brown’s “Abe Lincoln and Uncle Tom in the White House.” Conceived, commissioned and directed by AATP director Lundeana Thomas, Brown’s play explores slavery, freedom and the Lincoln myth through an African-American perspective.

The play begins with a passage from Harriet Beecher Stowe’s classic “Uncle Tom’s Cabin,” and Lincoln deliberates on signing the Emancipation Proclamation with a little help from Uncle Tom himself, who Thomas hopes audiences will get to know all over again, this time with a fresh perspective and in the context of his times. A lot can happen in 200 years, and as the pundits debate over whether America has just entered a post-racial era, it’s useful and wise to reflect on our shared history and consider both how long and how short a couple of centuries can be. —Erin Keane

The Playhouse @ U of L

The Mellwood Arts & Entertainment Center has worked hard to put all types of art under one roof. For a taste of what’s in that vast campus, visit the main branch of the library for the exhibit “Art in the City: Works from the Mellwood Arts Center.” Michelle Carrara, Pam Stockard and Ken Wuetcher are a few of 24 artists showcased who have studios at Mellwood. —Jo Anne Triplett

‘Bits & Pieces: A Culture of Scrap’

There should be a subcategory in visual arts called “recycled” or “trash” art. Watch what you throw away, because an artist might tackle you for it. One of those people would probably be mosaic artist T.B. Jackson-Williams. Her medium, resembling watercolor or acrylic paint, is really scraps of paper. Her color palette is torn from newspapers and magazines we throw away. She tears paper into tiny pieces, then arranges them into shapes.

Jackson-Williams has found inspiration from a wide variety of artists, such as Mary Cassatt, Gustav Klimt and Chuck Close. Close’s photo-realistic style has a resemblance to her torn-paper works — his pixilated-grid paintings look like mosaics.