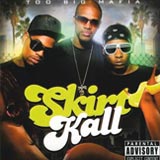 I didn’t have very high hopes. Both the name of the group and album are immediate turnoffs. A glance at the back cover doesn’t bode well, either. Guests Petey Pablo and Ying Yang Twins are not exactly selling points for me, though Playa’s Smoke E. Digglera, Geto Boys’s Willie D. and Twista raise a curious eyebrow.

The first couple songs breeze by, not quite living up to the negative view I’d already imagined, though not mind-blowing by any stretch. Then, out of “Nowhere” (pun intended), the lead single jumps out. This song’s a hit, catchy as hell, radio-ready, and I’m already picturing the video. The next single follows immediately, the title cut featuring the former Playa singer. What is assumed to be a strip-club track is actually a pretty strong hip-hop love song (add “I Don’t Wanna” to the title, and you get the idea). “Growing Pains” comes next. Another winner, an introspective piece.

There’s definite fast-forward material, as is to be expected on a 19-track album, but for those three cuts alone, Skirt Kall is recommended.