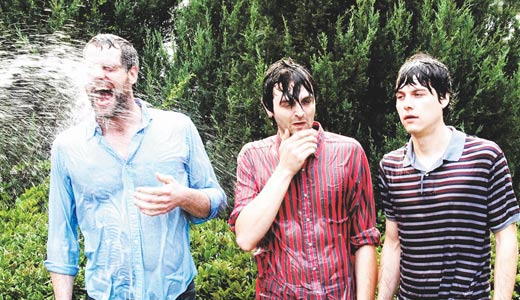 Sunset hosedown: All The Saints began at a Gringo Star show in AtlantaPhoto by Skylar Reeves

Jim Crook would prefer an end to the My Bloody Valentine references.

“We never set out to do that kind of thing,” says the drummer for Atlanta’s All The Saints. “Once we let the record out, people started throwing those references there. We’re just surprised ourselves.”

It’s a whole new set of circumstances in a thus-far-circumstantial outing for Crook, singer/guitarist Matt Lambert and bassist/singer Titus Brown.

“They set the bar so high,” Crook says of the current crop. “Atlanta is one of the biggest towns in the South, so there’s a bigger well to draw from.”

It also had more going on: “The move to Georgia was an escape from normality and what we’ve been experiencing for the 18 or 19 years that we lived there,” he says. “It’s spreading our wings and finding different ideas and different ways of living.”

All three were raised as devout Christians but don’t cling to their religious beliefs, and their music might be as good an indication of how far they’ve outgrown them. Sort of.

“Growing up in Alabama, (religion) is unavoidable. On my street in Atlanta alone, there’s like five churches,” Crook says. “It’s just the way it is. They’re pretty aggressive with it. That was a big motivation for our music, a common thread. In a way — I hate to use the word angst — but when you have something shoved down your throat, you wanna gag. You don’t want that to happen anymore.”

After seeing them live, producer Ben Allen (Gnarls Barkley, Animal Collective) invited them into his studio for two weeks to craft Fire on Corridor X, the Saints’ first proper album.

Allen expanded on the band’s trashy, relatively simplistic style to add greater sonic depth. “He would have ideas like, ‘Let’s run a Wurlitzer through an Echoplex,’ and add a whole new dynamic to the song and to the noise,” Crook says.

Fire was issued first on Killer Pimp, the label for A Place to Bury Strangers that was founded by former WZBC DJ and web developer Jon Whitney.

“It was instant credibility,” Crook says of Whitney. “He has been respected among the indie music scene since the early ’90s. He hooked us up with some booking agents and shared the CD with all his friends and all the people he knew. With his reputation, enough people heard about it.”

Late last year, serendipity struck again when Touch & Go released Fire to even wider acclaim. Finding those labels, Crook says, was a case of the band “being way luckier than we deserved.”