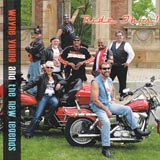 One doesn’t kick around the local music scene for nearly half a century without achieving the iconic status Wayne Young has. He was born to play the blues, starting with The Carnations in the late ’50s. Next came The Trendells, Cosmo & The Counts and eventually Soul Inc., one of Louisville’s most legendary rock bands of the ’60s. Over five decades on stage, he’s played with Bo Diddley, Paul Revere & the Raiders and The Byrds.

Fifty years in, Wayne and his New Legends have released Ride This! With an overwhelming classic rock feel, the biker-themed cover makes the band look tougher than the music they play. On “Motorcycle Mama,” they play up biker clichés with good humor, letting charm and sarcasm shine without being cheeky. Per usual, Young’s guitar is the unofficial spokesman for the band; its presence rarely, if ever, goes unnoticed.

While Young himself has a gritty but fairly standard-sounding blues voice, Herlon Anderson’s pipes take over on two songs — “What a Time To” and “Sail Away” — and suck the air out of the room.