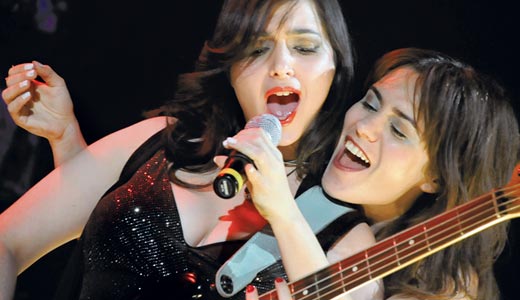 Working with contradictions can be tricky but rewarding. Actors Theatre of Louisville’s “Rock & Roll: the Reunion Tour” has a doozy to overcome: Rock bands are cool; musicals are not. While the show’s creators bring their love of rock to life with the passion of a garage band, the inherent artifice of professional theater overwhelms the rebellion and chaos so intrinsic to the music, and the result is more Hard Rock Café than CBGB.

Director Sean Daniels describes the show as “a hybrid that … kicks rock ’n’ roll in the teeth,” but that sense of danger and irreverence is largely missing from this production, an unabashed and mostly unchallenged love-fest. The script is strongest when the nostalgia is balanced with criticism, like the point/counterpoint retrospective of the ’60s that pits a Woodstock believer against a skeptic who didn’t fall for the myth. A sense of humor doesn’t hurt — if you’ve ever wondered what it feels like to be dumped for Weird Al Yankovic or laughed at Iggy Pop promoting family cruise ship vacations.

The writers (Daniels, sound designer Matt Callahan, dramaturge Julie Felise Dubiner and actor/singer/guitarist David Hanbury) asked “what is rock ’n’ roll?” and received more than 150 contributions that helped shape their script. They interspersed these anecdotes throughout the story of Danger 7, a small-time band whose ups and downs are chronicled by the narrator of a local music show (Ami Jhaveri, who also plays bass).

With Terrance (Jeremy Lee Cudd) on drums, Estro (Rebecca Hart) on bass and guitar, Johnny (Hanbury, inexplicably dressed as Jack Sparrow) on lead guitar and vocals and Teacher (Jon Spurney) on guitar and keys, Danger 7 is an homage to every scrappy band in any crappy town playing weddings and Bar Mitzvahs for the pure love of being on stage together. They hook up, break up, hit rock bottom and make up while providing the soundtrack for the fans’ most evocative memories.

The Reunion Tour covers roughly 40 years and a lot of stylistic ground, from Elvis Presley to Henry Rollins, which doesn’t always work with a single band. Hanbury nails the Rolling Stones’ “Street Fighting Man” but can’t quite pull off singing “London Calling” in New Romantic pirate drag, and Hart’s voice, while fine for “Proud Mary” and “Ball of Confusion,” doesn’t do Heart’s “Barracuda” justice.

So what is rock ’n’ roll? That late, great consummate fan Lester Bangs once shouted that it’s a “raw wail from the bottom of the guts,” and something gets lost when you tame it for a theatrical production (though allowing drinks into the Victor Jory is a step in the right direction). Still, even the toughest cynics melt when a father’s letter to his daughter details his earnest love for Bruce Springsteen and the band rolls out “Thunder Road,” proving that rock ’n’ roll is also a wistful bit of piano and a rough plea for redemption from a guy we call The Boss with no irony — absolutely none at all.