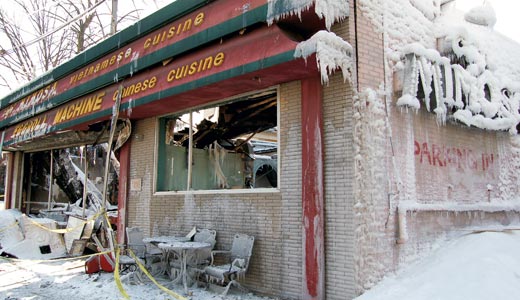 The best thing about a good restaurant is that it can become a friend.

Café Mimosa, a Vietnamese restaurant/sushi bar that doubled as the Eggroll Machine, became just such a friend to me over the years. When the dot-com bubble burst in the early 2000s and I found myself unemployed, I walked out of my former gig and went straight to Café Mimosa. It was the place I always seemed to end up.

As such, it broke my heart when a friend texted Friday morning to let me know Café Mimosa had been destroyed by fire. Shortly after 4 a.m., a devastating blaze gutted the little eatery. It was a gut-punch.

The first time I ever had sushi, it was at Café Mimosa. My friend talked me into it (thanks, Jenny), and from then on, I found myself returning to the cozy Bardstown Road spot weekly.

I managed to get my friend Greg hooked on the place as well, and it became our de facto dinner destination. The day the World Trade Center towers fell, Greg and I dined in near silence at Café Mimosa while watching the coverage on a TV behind the bar. We felt safe there.

In fact, Greg and I shared a house for a year blocks away from Café Mimosa — looking back, we should have just signed over our paychecks to owner Phat Le. Sitting at the oddly shaped Formica sushi bar, tucked away to the right when entering through the front of the restaurant, we ruminated on topics ranging from broken hearts to brown thrashers. (It’s a type of bird, in case you’re wondering.)

I became acquainted with the staff over the years, as well, which was not difficult, given how friendly they were. One of the most affable sushi chefs in town — I never knew his full name, just called him “T” — always seemed to have something extra for me, whether it be a new roll or an extra piece of nigiri. (T, if you’re reading this, thanks for making me that unagi roll back in 2006 — I still daydream about that thing.) And my friendly server, whose name I never learned, knew without asking what I wanted to drink each time I sat down.

Newspaper and television reports indicate that Mr. Le plans to rebuild the restaurant. That’s good news, but it’s difficult to imagine the place will ever seem the same. Nevertheless, the memories will always be there.